After her humiliating defeat in the Wyoming GOP Primary, RINO Liz Cheney wants Americans to ‘unite’ across party lines to prevent Donald Trump from regaining the White House.

SHE’S OUT! Wyoming Voters Throw Liz Cheney Out Of Congress!

Cheney got spanked by Trump-endorsed challenger Harriet Hageman, who received 66.3% of the vote vs. Cheney’s 28.9%.

But in truly delusional fashion, Cheney is attempting to frame her devastating primary loss as a ‘win.’

Because she’s “thinking about” a 2024 presidential run.

If Wyoming didn’t want Cheney as their congressional representative by nearly 40 points, then there’s ZERO CHANCE America wants her anywhere near the White House.

She has “launched a new political organization called “The Great Task,” a reference to President Abraham Lincoln’s Gettysburg address,” according to Zero Hedge.

Lincoln Project rebrand about to drop. The most overfunded and media-beloved fringe group in history. https://t.co/nPgoWSroo7

“That’s a decision that I’m going to make in the coming months,” she said in reference to possibly running for president.

“It is something that I’m thinking about,” she added.

“I have said since Jan. 6 that I will do whatever it takes to ensure Donald Trump is never again anywhere near the Oval Office and I mean it,” Cheney said.

In addition to her new PAC, Cheney will have a public forum for her campaign against Trump as vice chair of the committee investigating the former president’s role in the Capitol insurrection until she leaves Congress in January. Cheney was a rising Republican star until she stood up to Trump. After she voted to impeach Trump in the aftermath of the attack on the Capitol by a mob of his supporters, the political costs for Cheney’s defiance mounted. The Wyoming Republican Party voted to censure her and asked her to resign. Then she was removed as the third-ranking  House Republican leader by her colleagues, who accused her of abandoning the party.  That culminated in her loss Tuesday to Hageman by a two-to-one margin with half the votes counted. -Bloomberg

As Bloomberg also notes, Cheney’s loss illustrates how strong Trump’s grip is on the Republican party – with just two of 10 House Republicans who voted to impeach him following the J6 capitol attack having survived their primaries to make the ballot in November’s general election.

Cheney, the daughter of former vice president Dick Cheney, had been the #3 ranked Republican in the House – easily winning her last election in 2020. Things changed, however, when she became one of 10 Republicans that voted to impeach Trump – who Democrats accused of inciting the January 6th riot. She later joined the January 6th committee, on which she currently services as Vice Chair.

And look at what happened to the rest of the anti-Trump Republicans who voted to impeach: 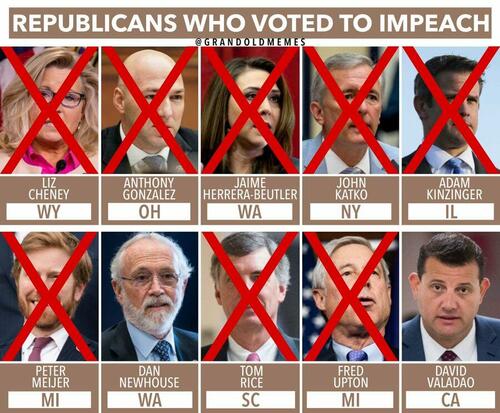 Cheney: Two years ago. I won this primary with 73% of the vote. I could easily have done the same again. The path was clear. But it would've required that I go along with president trump's lie about the 2020 election.. That was a path I could not and
would not take. pic.twitter.com/vRq0Fdz4x1

“Congratulations to Harriet Hageman on her great and very decisive WIN in Wyoming,” Trump said in a statement on Truth Social.

“This is a wonderful result for America, and a complete rebuke of the Unselect Committee of political Hacks and Thugs. Liz Cheney should be ashamed of herself, the way she acted, and her spiteful, sanctimonious words and actions towards others. Now she can finally disappear into the depths of political oblivion where, I am sure, she will be much happier than she is right now. Thank you WYOMING!” 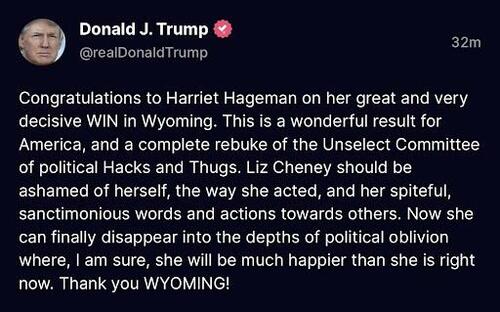 Good riddance to another RINO member of Congress!