Remember when everyone said there were no “sealed indictments”?

Yeah……Jeffrey Epstein just got busted by one!

And I believe MANY, MANY more are coming folks, stay tuned!

And buckle up, this ride is about to get bumpy!

Now when that sealed indictment was read in court today, the details were shocking!

An indictment alleging sex trafficking and sex trafficking conspiracy was unsealed Monday morning against financier and registered sex offender Jeffrey Epstein,  who pleaded not guilty during his initial appearance in a New York City federal court.

Prosecutors allege Epstein, the 66-year-old wealthy hedge fund manager arrested on Saturday, preyed on “dozens” of victims as young as 14.

“The victims described herein were as young as 14 years old at the time they were abused…and were, for various reasons, often particularly vulnerable to exploitation,” prosecutors wrote in court documents. “Epstein intentionally sought out minors and knew that many of his victims were in fact under the age of 18.”

Epstein appeared in a hearing that lasted about 30 minutes wearing a blue prison top with a brown t-shirt underneath, in addition to orange slip-on sneakers and “very messy” hair. Prosecutors said in the 36 hours since Epstein’s arrest, multiple attorneys and several individuals have come forward and said they were victims, none of which had previously been spoken to. 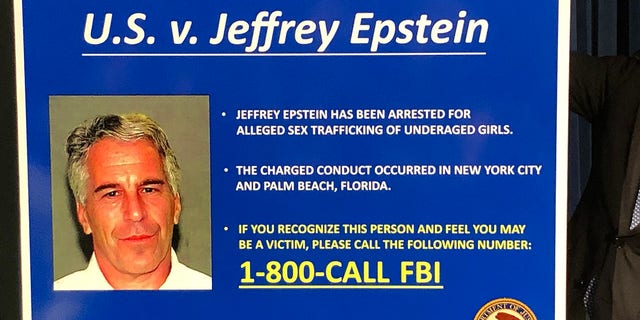 Epstein allegedly created and maintained a “vast network” and operation from 2002 “up to and including” at least 2005 that enabled him to “sexually exploit and abuse dozens of underage girls” in addition to paying victims to recruit other underage girls.

“This allowed Epstein to create an ever-expanding web of new victims,” U.S. Attorney Geoffrey Berman said at a news conference.

Berman added that nude photographs “of what appeared to be underage girls” were discovered at Epstein’s Manhattan mansion during a search following his arrest Saturday. The hundreds of photos were discovered in a locked safe, according to officials.

Prosecutors also allege Epstein “worked and conspired with others, including employees and associates” who helped facilitate his conduct by contacting victims and scheduling their sexual encounters with the 66-year-old at his mansion in New York City and Palm, Beach, Fla.

At Epstein’s multi-story mansion on the Upper East Side of Manhattan, prosecutors said that victims would be escorted to a room with a massage table where they would perform a massage on him.

“The victims, who were as young as 14 years of age, were told by Epstein or other individuals to partially or fully undress before beginning the ‘massage,'” prosecutors wrote. “During the encounter, Epstein would escalate the nature and scope of physical contact with his victims to include, among other things, sex acts such as groping and direct and indirect contact with the victim’s genitals.”

In Monday’s court appearance, prosecutors said that the massage room in New York was set up exactly as how the alleged victims described it 15 years ago.

Victims would be paid hundreds of dollars in cash by either Epstein or one of his associates or employees, according to prosecutors. The 66-year-old also allegedly “incentivized his victims” to become recruiters by paying the victim-recruiters hundreds of dollars for each girl brought to him.

“In so doing, Epstein maintained a steady supply of new victims to exploit,” federal prosecutors said.

FBI Assistant Director-in-Charge William Sweeney said that Epstein was arrested at Teterboro Airport in New Jersey at 5 p.m. on Saturday “without incident.” Epstein is now being held at the Metropolitan Correctional Center, a federal jail near the Manhattan courthouse where he appeared Monday afternoon.

Berman said Epstein flew into the jurisdiction of the Southern District of New York over the weekend, prompting the arrest.

“We think he’s a significant flight risk,” he added, citing Epstein’s “enormous wealth” that includes two planes in addition to the financier spending “much of the year” living abroad as to why prosecutors will ask that he remain jailed, pending trial. A federal judge ordered Epstein to remain behind bars until a bail hearing, which was moved to Monday, July 15.

Prosecutors claimed Epstein has posed “extraordinary” risk as a man of “nearly infinite means” with “every motivation in the world to flee,” and having the means to do so.

Lawyers representing Epstein said that their client was not a risk to others since in the past 10 years his conduct has never been challenged and he is under “constant surveillance.” Defense officials added that Epstein never sought to fleed, and never anticipated a time at which he would flee.

Epstein’s lawyers also argued the matter had been settled in a Florida case involving similar charges a decade ago.

Attorney David Boies, who represents some of the victims, told Fox News on Sunday he expected more superseding indictments would be eventually be added.

“This is an important first step. Hopefully, prosecutors will focus on some of his [Epstein’s] co-conspirators going forward,” Boies told Fox News.