After weeks of speculation that the troops sent to the border will be unarmed, it now looks like President Trump is fixing that problem!

In a new report from CNN, it’s reported that President Trump will now allow the troops to be armed and to defend themselves if needed!

Here are more details, from CNN:

President Donald Trump is expected to grant new authority to US troops on the Southwest border with Mexico to protect Customs and Border Protection personnel from migrants if they engage in violence, according to two defense officials and another US official directly familiar with the plans. An additional administration official tells CNN that the authority will also authorize protection of federal property.

Currently troops do not have any authorities that would allow them to intervene if CBP personnel came under attack unless they need to act in their own self-defense. 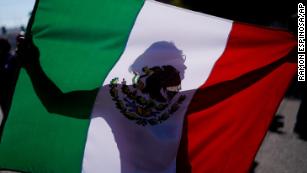 The move could be announced as soon as Monday evening, officials said. The mission will be characterized solely as "protection of CBP" personnel, according to the administration official.

Taking a Tally on “Her Turn”

A recent approval poll of House of Cards president Claire Underwood reveals viewers' feelings about iron-fisted leaders. We also explore the lay of the land for women in politics.

This comes as Department of Homeland Security officials said Monday that they had started to get information from "multiple sources including individuals in the Mexican government" of potential waves or groups of individuals who were discussing an incursion into legal ports of entry in California by attempting to pass through vehicle lanes.

Any potential use of force by US troops to protect CBP personnel must be "proportional," the official said.

It is expected the Pentagon and US Northern Command will amend the current document detailing the rules governing the "use of force" on the border mission.

All three officials are adamant that the change is not about troops firing weapons at migrants crossing the border. Instead the new rules will be aimed at providing the basic authorities to allow for protective measures. Previously troops did not have any authorities that would allow them to intervene if CBP personnel came under attack.

The Pentagon has been working for the last several days on options for how troops can protect CBP.

The defense officials are also emphasizing that National Guard forces activated by governors, as well as state and local civilian law enforcement authorities in a given area, should be relied upon as much as possible.

DHS spokesperson Katie Waldman told CNN, "As Secretary Nielsen has said, we will not allow our frontline personnel to be in harm's way. We will do everything we can to protect those who defend our nation's sovereignty and secure our border. We appreciate the Department of Defense stepping in to assist the Department of Homeland Security as needed."

Get Yours For FREE While Supplies Last: