“The training was featured in the 2021 IRS annual report, which shows agents at the agency’s National Criminal Investigation Training Academy (NCITA), which is located within the Federal Law Enforcement Training Center (FLETC) in Brunswick, Georgia.”

An Internal Revenue Service internal report shows heavily armed agents simulating an assault on a suburban home as part of their training. https://t.co/oD4uYNxIn9

This is why the IRS is buying up weapons and ammo. This is what it has come to…assault the public for any reason the left deems necessary…including a tax audit.

Page 17 of the report shows armed agents with guns drawn prepared to swarm a suburban home. 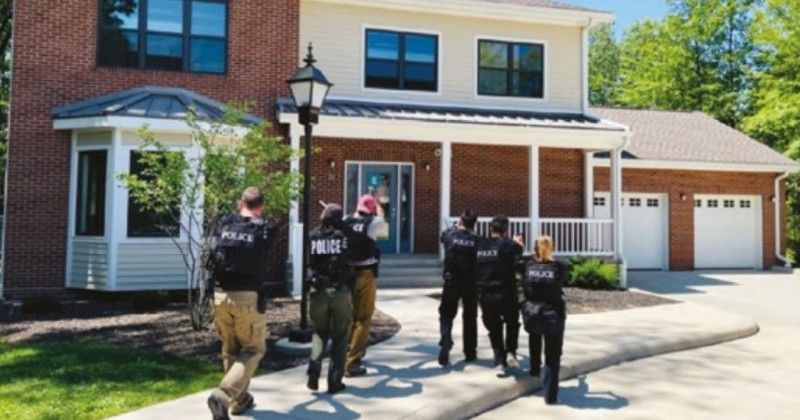 The 2021 annual report comes on the heels of the IRS listing suspicious job duties for 87,000 new positions in the agency via the Inflation Reduction Act.

Is the IRS Attempting to Build an 87,000-Person Army? Major Duties Include Carrying a Firearm

Major duties include: “Carry a firearm and be willing to use deadly force, if necessary.”

The IRS is hiring!

Major duties include: “Carry a firearm and be willing to use deadly force, if necessary.”@RepMattGaetz we need to cut off their ammo purchases in '23! pic.twitter.com/LmqAQHqDzl

Rep. Matt Gaetz has warned that the IRS is stockpiling on ammo and introduced legislation to prevent the agency from acquiring ammunition.

Rep. Matt Gaetz Introduces the ‘Disarm the IRS Act’ of 2022 to Ban Agency From Acquiring Ammunition

The report documents how the agents are given “firearms training” and another image shows agents wearing tactical clothing that says ‘POLICE’ and ‘IRS-CI’.

Training also includes “physical fitness conditioning and use of force training, which includes firearms, weaponless tactics, and building entry,” according to the report.

“In addition to SAIT, NCITA assists in providing advanced training to special agents in use of force, firearms instruction, defensive tactics, and building entry.”

Another image shows agents having entered a house with guns drawn.

The training simulation is likely to prompt concern following the revelation of an IRS job posting that announced it was looking to hire people who are ready to kill.

The job ad listed one of the “major duties” of IRS agents to be able to “carry a firearm and be willing to use deadly force, if necessary.”

The IRS subsequently deleted the job posting, which was discovered after the Democrats introduced a new bill that would give $80 billion in funding to the IRS to hire 87,000 new IRS agents.

$45.6 billion contained in the ‘Inflation Reduction Act’ will be specifically designated for IRS “enforcement.”