In the past week, there have been rumors circulating on social media regarding the alleged deaths of four Ontario doctors within one week in July.

Three of the doctors were from Mississauga’s Trillium Health Partners and one was from North York General Hospital. How many more before questions are asked by the establishment?https://t.co/rbL1Ly6fZl via @cp24

From the Toronto Sun:

Attempting to quash social media gossip and speculation, two GTA hospitals have confirmed the deaths of four staff doctors during one week in July but deny any connection to COVID-19 vaccinations.

Three of the doctors were from Mississauga’s Trillium Health Partners and one was from North York General Hospital.

“It is with deep sadness that Trillium Health Partners mourns the loss of three of our physicians who recently passed away,” said a statement from Trillium sent to the Toronto Sun on Wednesday. “Dr. Jakub Sawicki, Dr. Stephen McKenzie and Dr. Lorne Segall were trusted colleagues who were committed to caring for their patients and community.”

Trillium added: “The rumour circulating on social media” that these deaths could be linked to a recent administration of the COVID-19 vaccine “is simply not true.”

The Toronto Sun also received an email from North York General Hospital saying, “we have also received questions about the passing of our Chief of Emergency Medicine recently and wanted to reach out proactively with a short statement in case you have heard online rumours about this as well.”

In that statement it says “North York General Hospital can confirm that the tragic death of Dr. Paul Hannam was not related to COVID-19 or vaccinations of any kind.”

What is agreed upon is that all four doctors were tops in their fields and much-loved and respected.

It’s rumored that an alleged whistleblower stated the hospital system started administering the 4th dose of the COVID-19 shot to staff days prior.

So this is horrific and will make our hsptl system collapse faster. Young healthy drs just dropping. pic.twitter.com/ublNbiBd72 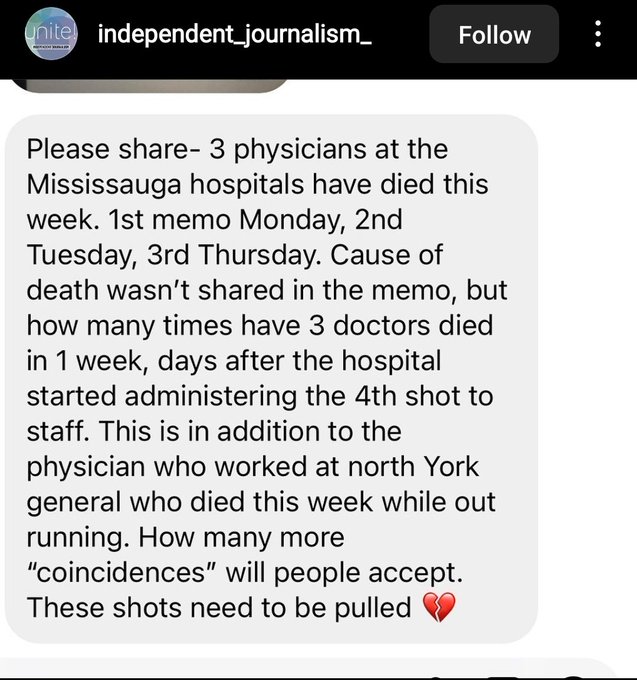 To ensure the safest possible environment to work and deliver care to the community we serve, COVID-19 vaccination is now mandatory for all THP staff, professional staff, volunteers and learners. This excludes those with an approved medical exemption or accommodation. This new policy took effect on September 7, 2021, with a 6 week implementation period until October 20, 2021. As one of the hardest hit communities during this pandemic and because of the proven effectiveness of the vaccine against the virus and its variants, we encourage everyone who is eligible to get the COVID-19 vaccine as soon as possible.