Justin Trudeau’s Communist regime is indoctrinating Canadian schoolchildren that ‘free speech’ is a common defense of hate propaganda and a border wall between countries is racist.

A new government-funded booklet made for children describes President Trump’s border wall with Mexico and free speech as two examples of hate.

Page 31 of the pamphlet, titled “Confronting and Preventing Hate in Canadian Schools,” says President Trump’s border wall is a good example of hate. The government-funded group also describes the conservative party as a group whose members include bigots, groypers, and white nationalists.

A booklet made for school children that calls the Red Ensign flag a hate symbol and identifies the Conservative Party as a target of “infiltration” by racists was approved by Cabinet as a taxpayer-funded project.

A booklet made for school children that calls the Red Ensign flag a hate symbol and identifies the Conservative Party as a target of “infiltration” by racists was approved by Cabinet yesterday as a taxpayer-funded project.

“This new resource will be delivered through workshops in schools across the country and it will help raise awareness with students,” Diversity Minister Ahmed Hussen told reporters. The booklet would help “teach core values to our kids,” he said.

According to Blacklock’s Reporter, Hussen approved a $268,400 grant to fund the guide Confronting and Preventing Hate in Canadian Schools. The guide, written by the Canadian Anti-Hate Network (CAHN), also warns students to be wary of classmates who speak fondly of Donald Trump.

CAHN is a federally-subsidized group that earlier received an identical $268,400 grant to operate its website. Hussen says it is “an organization that I respect very much.”

In a chapter on “hate promoting symbols,” the booklet names the Red Ensign flag as offensive even though it was used as Canada’s national symbol until 1965.

“Its usage denotes a desire to return to Canada’s demographics before 1967 when it was predominantly white,” the booklet says. 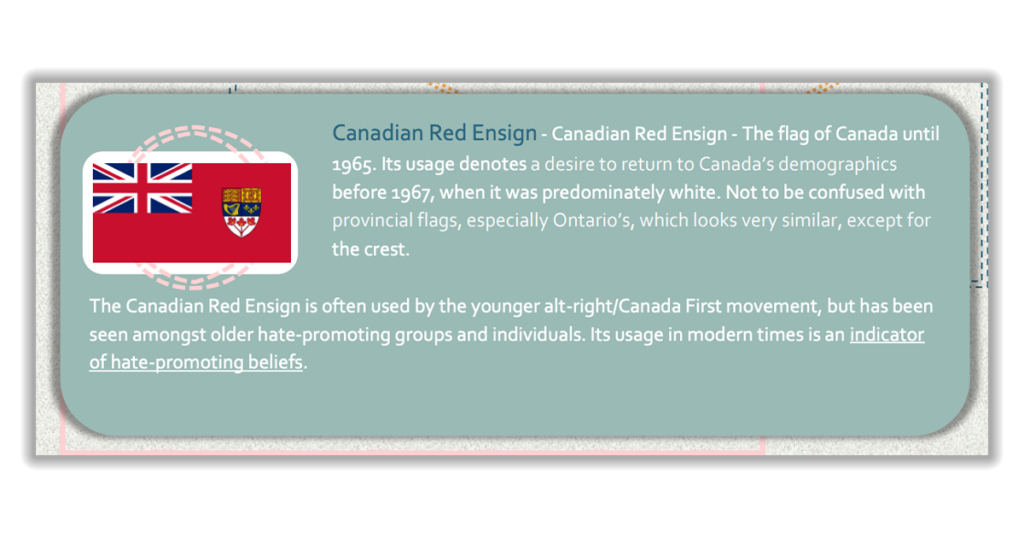 The booklet refers to the Conservative Party twice as a group whose members include bigots and “groypers” defined as a “loose collection of young white nationalists.” Without elaborating, the guide writes that “they sometimes attempt to infiltrate mainstream Conservative political parties.”

“In 2020 McMaster University Conservatives were scrutinized by allowing members with overly bigoted beliefs and ties,” wrote CAHN. They also cited their own website as a source. Common “conservative campus groups” were also named.

No other political parties were named in the guide.