With the strange coincidences surrounding the monkeypox outbreak, I think that’s a valid question.

As previously noted, the FDA approved a vaccine for smallpox and monkeypox in 2019.

Globalist Bill Gates added to these suspicions by randomly warning about a smallpox bioterrorist attack scenario.

Just days after Gates declared in an interview that the world needs to prepare for bioterror attacks from viruses such as smallpox, the CDC publicly announced that vials labeled as “smallpox” were discovered in Merck’s lab in Pennsylvania.

To further increase suspicions, the FDA randomly approved a smallpox drug, Tembexa (brincidofovir), because “there have been longstanding concerns that the virus that causes smallpox, the variola virus, could be used as a bioweapon.”

Although naturally occurring smallpox no longer exists, concerns about potential uses of variola virus as a bioweapon has made smallpox drug development an important component of the U.S. medical countermeasures response.

Because smallpox is eradicated, the effectiveness of Tembexa was studied in animals infected with viruses that are closely related to the variola virus. Effectiveness was determined by measuring animals’ survival at the end of the studies. More animals treated with Tembexa survived compared to the animals treated with placebo. FDA approved Tembexa under the agency’s Animal Rule, which allows findings from adequate and well-controlled animal efficacy studies to serve as the basis of an approval when it is not feasible or ethical to conduct efficacy trials in humans.

Safety information to support approval of Tembexa was derived from clinical trials of the drug for a non-smallpox indication, primarily from patients who received hematopoietic stem cell transplants.  An increased risk of death was seen in another disease (Cytomegalovirus disease – a viral infection) when Tembexa was used for a longer-than-recommended duration (longer than once a week for two weeks on days 1 and 8). Tembexa is only approved for the treatment of smallpox.

But a closer look at Tembexa shows that it’s a dangerous drug with potentially catastrophic side effects.

As Daniel Horowitz of The Blaze noted in a previous Op-Ed, Tembexa is a “failed repurposed drug with safety concerns.”

If the FDA decides that the smallpox newcomer Tembexa is appropriate for monkeypox, there's a very alarming finding. Low sperm count that can affect your ability to conceive children https://t.co/DbFN22tUBd pic.twitter.com/nvuLude1Pw

Out of nowhere, the FDA approved a smallpox drug last year, which was never tested in humans for smallpox and has a black box warning. What do they know that we dont? https://t.co/p0v549Uuj0

Its maker, Chimerix, conducted three failed Phase 3 trials for the indication of adenovirus, and it flopped! It also comes with an FDA “black box” warning for use for smallpox, for increased mortality after taking more than just two doses, based on those same failed studies!

So just like remdesivir, the drug they plan to use is an expensive, on-patent drug, although repurposed. But unlike ivermectin, which was extraordinarily safe and effective for its original use – yet is vociferously opposed by the cabal – these drugs failed miserably in their original indications. Just like the other two failed COVID drugs approved by the FDA – baricitinib and tofacitinib – this smallpox drug comes with an FDA black box warning!

Shockingly, the FDA notes in its June 4 approval letter that it did not conduct any human trials for safety and relied on the “Animal Rule,” “which allows findings from adequate and well-controlled animal efficacy studies to serve as the basis of an approval when it is not feasible or ethical to conduct efficacy trials in humans.” But that is only when it is proven from previous approved indications to be safe and effective so that it can be repurposed for a secondary indication in its same formulation based on animal studies … you know, like perhaps something like ivermectin being used for antiviral after approval for parasites because it was so safe and effective. But this drug was proven unsafe and ineffective to the point that it never got approval for its primary indication and is now being used for a secondary indication without a human study! 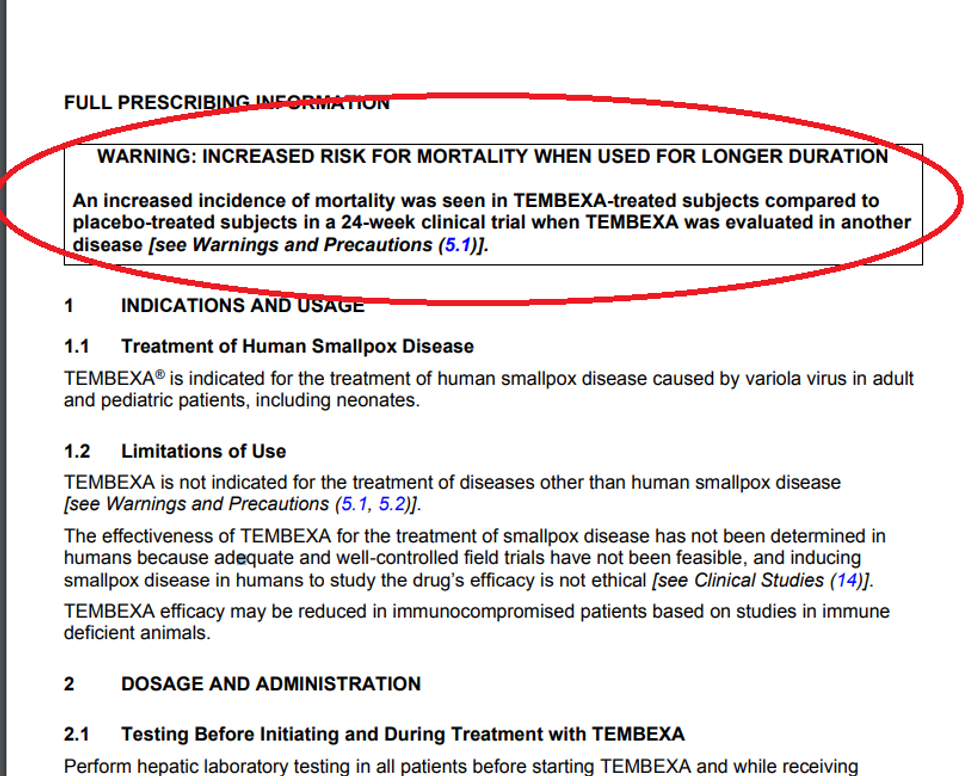