While DuckDuckGo has been a Google alternative for online browsing, the search engine is the latest member of the censorship club.

“Like so many others I am sickened by Russia’s invasion of Ukraine and the gigantic humanitarian crisis it continues to create. #StandWithUkraine️,” Weinberg tweeted. “At DuckDuckGo, we’ve been rolling out search updates that down-rank sites associated with Russian disinformation.”

“In addition to down-ranking sites associated with disinformation, we also often place news modules and information boxes at the top of DuckDuckGo search results (where they are seen and clicked the most) to highlight quality information for rapidly unfolding topics,” he continued.

Like so many others I am sickened by Russia’s invasion of Ukraine and the gigantic humanitarian crisis it continues to create. #StandWithUkraine️

At DuckDuckGo, we've been rolling out search updates that down-rank sites associated with Russian disinformation.

DuckDuckGo's mission is to make simple privacy protection accessible to all. Privacy is a human right and transcends politics, which is why about 100 million people around the world use DuckDuckGo. (We don't have an exact count since we don't track people.)

What exactly is "as is"? Search results aren't a completely random list of web sites. They are created based on a complex set of algorithms weighing 100s of factors.

DuckDuckGo’s search results have gone to s**t over the past two years because they mostly just index Bing results (the two companies have a deal together).

Microsoft announced in late February that they’re going to manually demote RT and Sputnik in Bing search results, ban their apps from the Microsoft Store and ban them from advertising on their network.

Whether Weinberg is taking some “principled” stand against “Russian disinfo” or just following Microsoft’s lead because his site is mostly just a Bing scraper is not clear.

Weinberg told the New York Times last month that his company is now operating as a snitch for Bing. 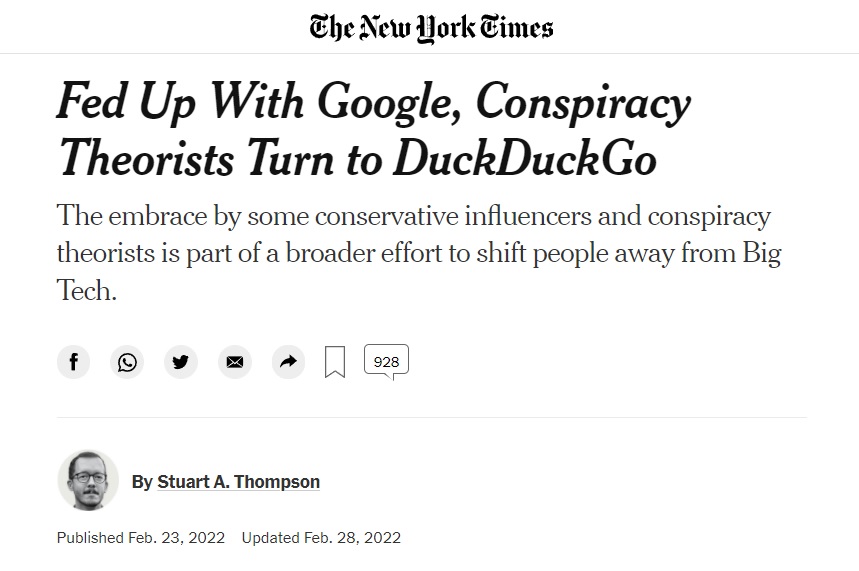 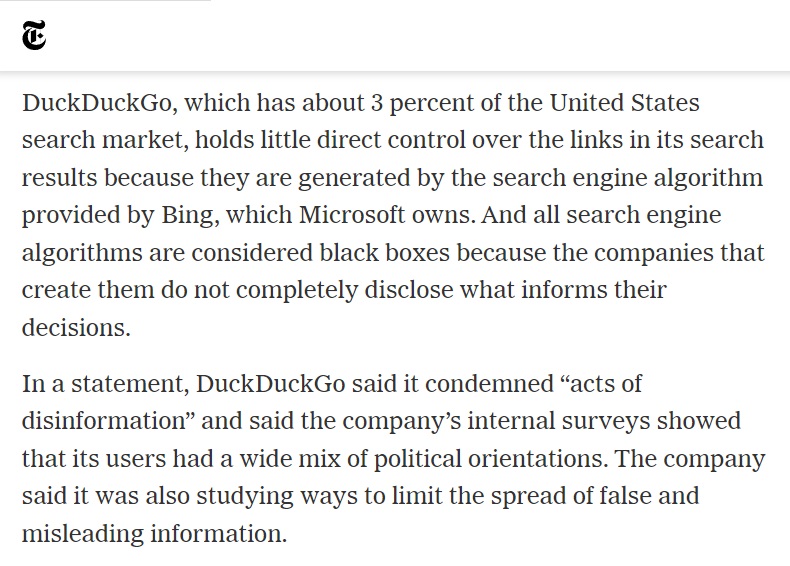 DuckDuckGo brands itself as a privacy-focused alternative to Google — and has gained massive popularity among conservatives who are increasingly finding themselves to be censored online.

On Sunday, Libs of Tik Tok tweeted out screenshots that were posted on 4chan of a user saying that they were rejected for a job by DuckDuckGo, but when they applied as a less qualified “black lesbian” they were moved to the second round of interviews.

The user had included screenshots of their exchange, alleging that they were passed over because they are a white man.

“I’ve been working as a mobile developer for 12 years. I’m a straight white male who knows what the f-ck I am doing in my occupation. But lately, I’m struggling to find another place to work,” the 4chan user wrote. “I applied for a job at DuckDuckGo, and got told to go f-ck myself right away. So I reapplied as a black lesbian 5 years of experience who can’t program or spell. They are moving me to the 2nd round of interviews.”

The user included what they said was their real resume and the fake one — along with the emails to and from DuckDuckGo.

Speaking to Gateway Pundit, the owner of the Libs of Tik Tok account said that they find it odd that DuckDuckGo markets itself as protecting privacy and being accessible for all — yet appear to be aiding Big Tech censorship. 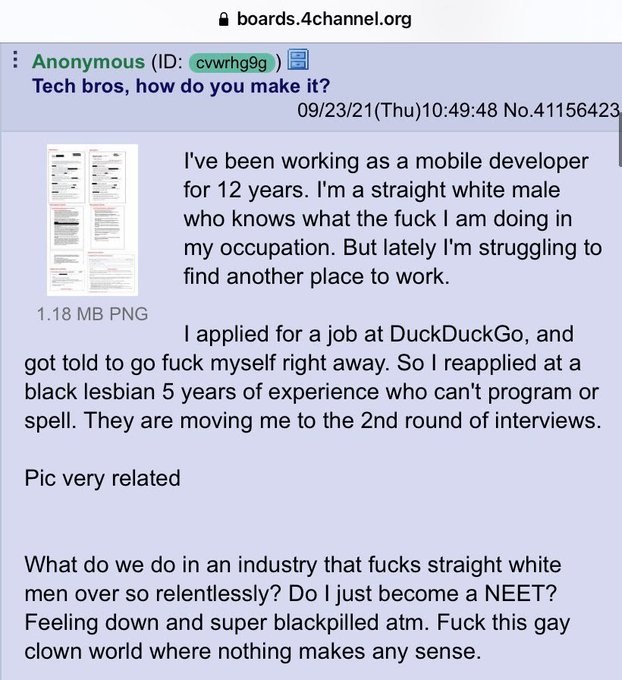 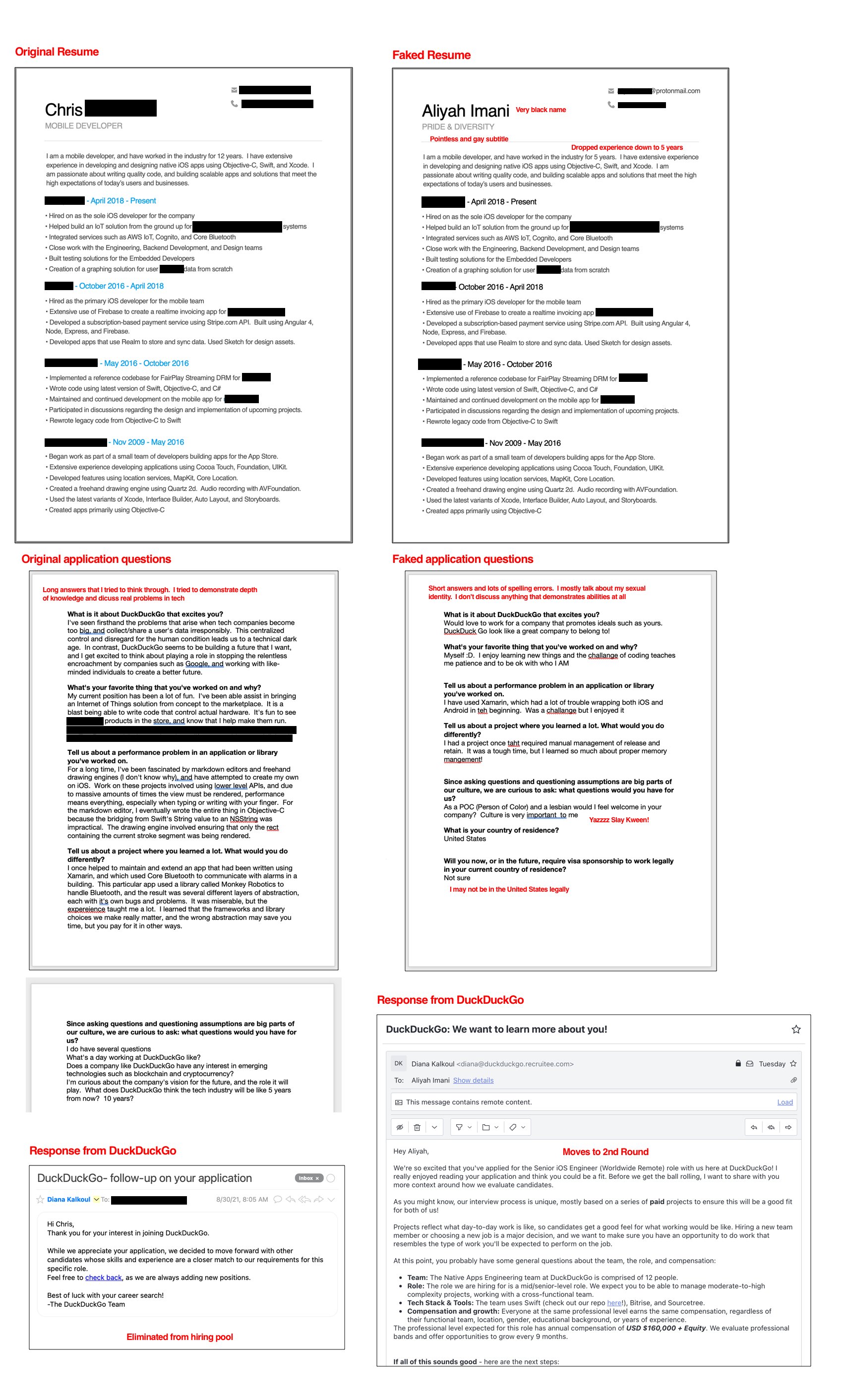 While DuckDuckGo markets itself as a censorship-free Google alternative, it appears they’ve succumbed to the same Big Tech tactics of attacking unapproved opinions.

Switched to Brave about 6 months ago. It’s great !

If you have experience with the search engine, drop a comment below!