Is this the smoking gun that thoroughly proves SARS-CoV-2 was manufactured in a lab?

Also, does the recent discovery prove that Moderna had inside knowledge of how to develop the “vaccine” for COVID-19 at record speed?

A peer-reviewed study published by Frontiers in Virology on February 21, 2022 reveals shocking findings during the sequencing of the furin cleavage site (FCS) in the SARS-CoV-2 Spike (S) protein.

Researchers conducted a BLAST search for the 12-nucleotide insertion and found a 100% reverse match in a proprietary sequence found in the US patent 9,587,003.

Moderna is the patent applicant.

In simple terms, the furin cleavage site in SARS-CoV-2 contains a genetic sequence that matches the same sequence called “MSH3” in the Moderna patent.

WHOA! Finally published. This is #modernagate$MRNA own the patent for this artificial MSH3 gene.
The very gene that was needed to create the Furin Cleavage site in #SARSCOV2. https://t.co/Of1gbPCGY1#CTCCTCGGCGGGCACGTAG https://t.co/8ILIzoHD6p pic.twitter.com/xBJbbq6Uio

Modified polynucleotides for the production of **ONCOLOGY-related** proteins and peptides https://t.co/wfb8gfX4B3 pic.twitter.com/IsbVKUGtKY

All those people saying that the sequence exists in bacteria (yes but rarely) are forgetting that it would still require a very weird hens-teeth rarity recombination event in a lab for that sequence to transfer.

I wrote this about your tweet and related matters:https://t.co/OzXOS7jeFx

Among numerous point mutation differences between the SARS-CoV-2 and the bat RaTG13 coronavirus, only the 12-nucleotide furin cleavage site (FCS) exceeds 3 nucleotides. A BLAST search revealed that a 19 nucleotide portion of the SARS.Cov2 genome encompassing the furing cleavage site is a 100% complementary match to a codon-optimized proprietary sequence that is the reverse complement of the human mutS homolog (MSH3). The reverse complement sequence present in SARS-CoV-2 may occur randomly but other possibilities must be considered. Recombination in an intermediate host is an unlikely explanation. Single stranded RNA viruses such as SARS-CoV-2 utilize negative strand RNA templates in infected cells, which might lead through copy choice recombination with a negative sense SARS-CoV-2 RNA to the integration of the MSH3 negative strand, including the FCS, into the viral genome. In any case, the presence of the 19-nucleotide long RNA sequence including the FCS with 100% identity to the reverse complement of the MSH3 mRNA is highly unusual and requires further investigations.

A peculiar feature of the nucleotide sequence encoding the PRRA furin cleavage site in the SARS-CoV-2 S protein is its two consecutive CGG codons. This arginine codon is rare in coronaviruses: relative synonymous codon usage (RSCU) of CGG in pangolin CoV is 0, in bat CoV 0.08, in SARS-CoV 0.19, in MERS-CoV 0.25, and in SARS-CoV-2 0.299 (9).

The correlation between this SARS-CoV-2 sequence and the reverse complement of a proprietary mRNA sequence is of uncertain origin. Conventional biostatistical analysis indicates that the probability of this sequence randomly being present in a 30,000-nucleotide viral genome is 3.21 ×10−11 (Figure 2).

The proprietary sequence SEQ ID11652, read in the forward direction, encodes a 100% amino acid match to the human mut S homolog 3 (MSH3) (9). MSH3 is a DNA mismatch repair protein (part of the MutS beta complex) (11). SEQ ID11652 is transcribed to a MSH3 mRNA that appears to be codon optimized for humans (12). We did not find the 19-nucleotide sequence CTCCTCGGCGGGCACGTAG in any eukaryotic or viral genomes except SARS-CoV-2 with 100% coverage and identity in the BLAST database (Supplementary Tables 1–3). 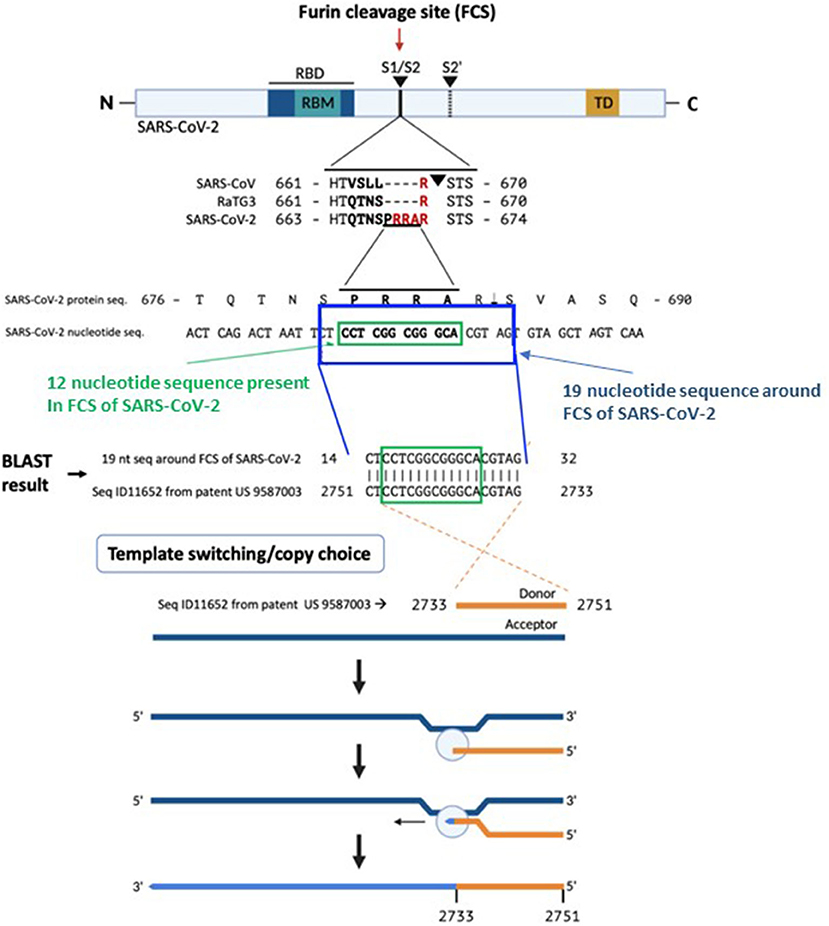 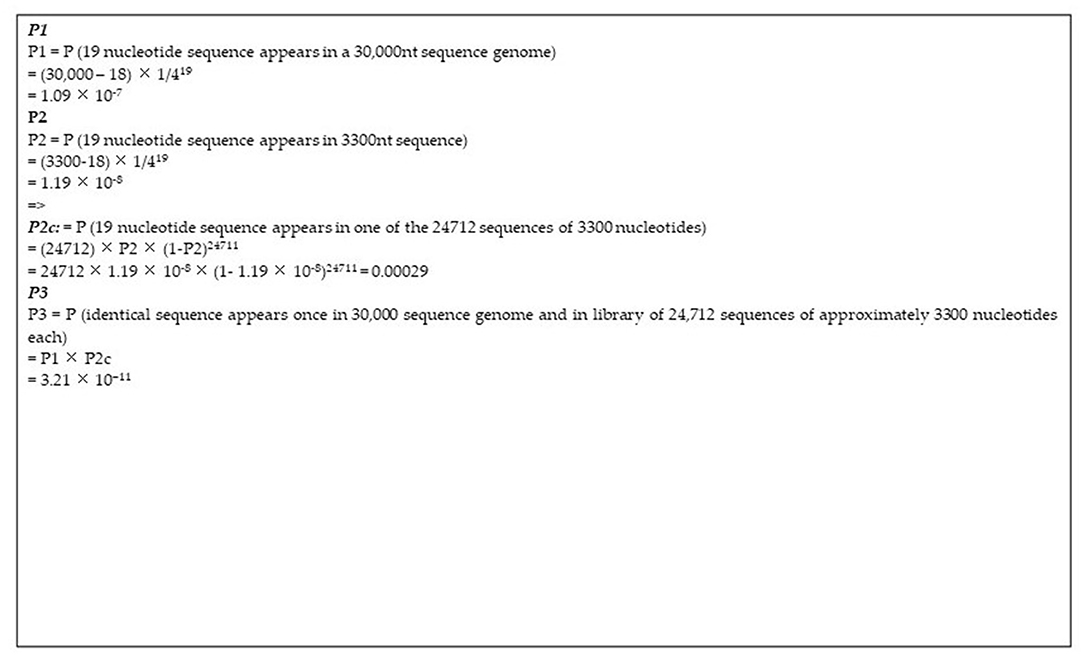 The patent titled “Modified polynucleotides for the production of oncology-related proteins and peptides” states:

The invention relates to compositions including polynucleotides encoding polypeptides which have been chemically modified by replacing the uridines with 1-methyl-pseudouridine to improve one or more of the stability and/or clearance in tissues, receptor uptake and/or kinetics, cellular access by the compositions, engagement with translational machinery, mRNA half-life, translation efficiency, immune evasion, protein production capacity, secretion efficiency, accessibility to circulation, protein half-life and/or modulation of a cell’s status, function, and/or activity.

The short of this (and you NEED to read the long version) is that Sars-Cov2 has a genetic sequence CTCCTCGGCGGGCACGTAG, that is the mirror image (complement) of the same sequence called “MSH3”, in the Moderna patent 9,587,003 from 2018.

How did bats copy the moderna patent sequence into their coronavirus, as @JikkyKjj asked? Of course they did not, and this is a further proof that it is a lab virus.

Still, why is the sequence there?

To add to what Naked Emperor posted, there is actually a possible reason of how this happened: the Covid virus was grown (cultured) in cell lines that used the MSH3-mutated cell lines:

Yes, that’s right. Every single one of these patents that contains that 19nt sequence (for which the probability of occurring by random chance is less than 1 in a billion) is from Moderna. [Note the sequence is actually the reverse complement sequence but this is likely a direct result of the cell lines that it occurred in – MSH3_mutated cell lines designed for developing cancer vaccines, the Moderna patent was actually for a mutated MSH3 gene for this purpose]

This sheds some light on lab origin of Sars-Cov-2. Whoever designed it, used Moderna-patented genetically modified cell lines containing the complement of CTCCTCGGCGGGCACGTAG, to grow the virus.

This might also explain why Moderna “only needed two days” to come up with a vaccine for a completely novel virus. The explanation, of course, is that it had plenty of time to develop the vaccine well in advance. It was not quite as novel to Moderna as it seemed, containing a Moderna patented sequence.