Comedian Chelsea Handler had to unexpectedly cancel several shows scheduled in Oregon after suffering a health scare that left her hospitalized. 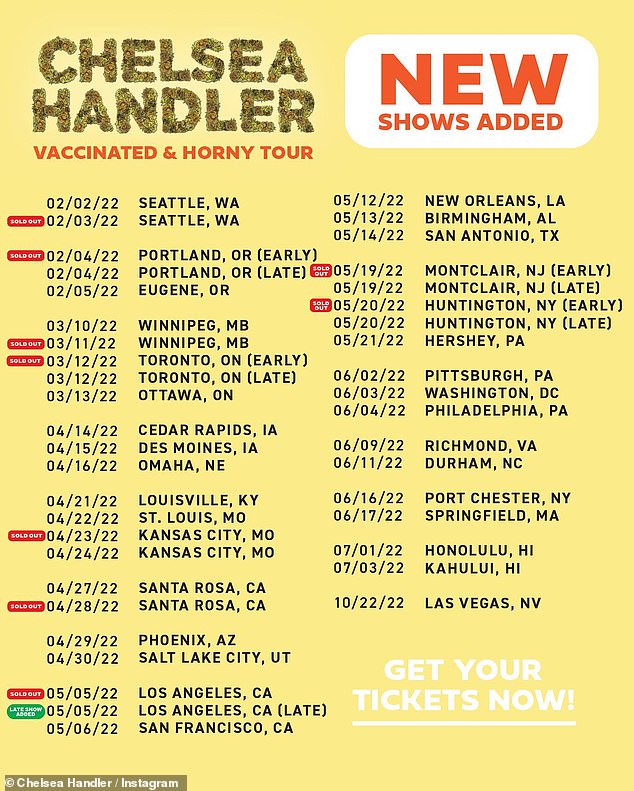 “I am so sorry I had to cancel my shows tonight in Portland and my show in Eugene,” Handler said. “I had a scare at the hospital, and I don’t have COVID, and I’m okay, but I had to reschedule my shows.”

Chelsea Handler reunites with boyfriend Jo Koy following a health 'scare' which left her in the hospital https://t.co/qDP1YPIGB0

Chelsea Handler canceled multiple comedy shows due to a health 'scare,' but made it clear she doesn't have COVID (and isn't pregnant). https://t.co/PtNi1G8UIz

Handler announced the news via Instagram on Friday, from what appeared to be a hospital bed. In the video, she apologized for the cancellations but did not elaborate on her health issue.

Sounding somewhat tired in the tone of her voice, Handler ended the clip with an apology and by, of course, showcasing her hilarious comedic touch.

‘I will see you all when I see you, and I’m sorry that I had to cancel. But I’m all OK. And I’m not pregnant.

In all, she cancelled three stand-up gigs: early and late shows in Portland on Friday, February 4, as well as the following night on Saturday, February 5 in Eugene, Oregon.

For the video, the New Jersey native was dressed in a traditional hospital patient gown and had a wire attached to her chest.

Later on Saturday, after being discharged from the hospital, Handler returned to Instagram to give her 4.3 million fans and followers an update on her condition.

‘Okay everybody, I’m safe and sound. Everything’s okay,’ she shared, seemingly from her bedroom with boyfriend Jo Koy sitting just feet away on the bed.

She had on a facial mask as she spoke to the camera.

‘I’m just going to chill out for a couple of weeks to recover because my Buddha came and rescued me,’ she joked, in a reference to her beloved pet pooch, as she turned the camera on Koy, 50.

Recall, Chelsea Handler said she got really sick and ‘went deaf in one ear’ after getting her second dose of the Moderna vaccine last year.

“Ok, so I got my second shot of Moderna today and I feel really sick and it’s only been four hours and I’m deaf in one ear,” Handler said while putting her hand to her ear in a video posted to her Instagram page in May of last year.

Handler nervously asked her Instagram followers if they had experienced the same side effects after getting the Covid jab.

“I thought I was gonna get sick tomorrow…but I feel sick. Did this happen to other people? Please tell me,” she said.

The news of Handler’s hospitalization follows reports of fellow comedian Heather McDonald collapsing seconds after joking about being fully vaccinated and boosted.