Their plan is called the “red mirage” which will feature celebrities, news outlets, and other sources running ads to cast doubt on Nov. 3 vote election results.

The goal of the “red mirage” is the left will portray mail-in ballots as not being all counted and it will attempt to persuade Americans that their votes have not been counted yet so there is no clear winner on election night.

This comes after the  Supreme Court allowed mail-in ballots to be counted in Pennsylvania up to three days after the election which some say it was a horrible decision that will promote election fraud.

This focuses on Philadelphia, & convention center where officials will count the city's unprecedentedly huge mail-in vote, out of which a Biden win could take days to become clear.
'Red mirage': the 'insidious' scenario if Trump declares an early victory https://t.co/zA8CJ0PYqR

Biden's early vote lead is not enough & they know it.

The Guardian gave a bias opinion of the “red mirage” which shows it’s already come into effect:

Scenarios for how an election disaster could unfold in the United States next week involve lawsuits, lost ballots, armed insurrection and other potential crises in thousands of local jurisdictions on 3 November.

But there is one much simpler scenario for election-night chaos, centering on a single address, that many analysts see as among the most plausible.The scenario can be averted, election officials say, by heightening public awareness about it – and by cautioning vigilance against carefully targeted lies that Donald Trump has already begun to tell.

Known as the “red mirage”, the scenario could develop if Trump appears to be leading in the presidential race late on election night and declares victory before all the votes are counted.

The red mirage “sounds like a super-villain, and it’s just as insidious”, the former Obama administration housing secretary Julían Castro says in a video recorded as a public service announcement to voters this week.

Here is the official statement made by the Trump Campaign: 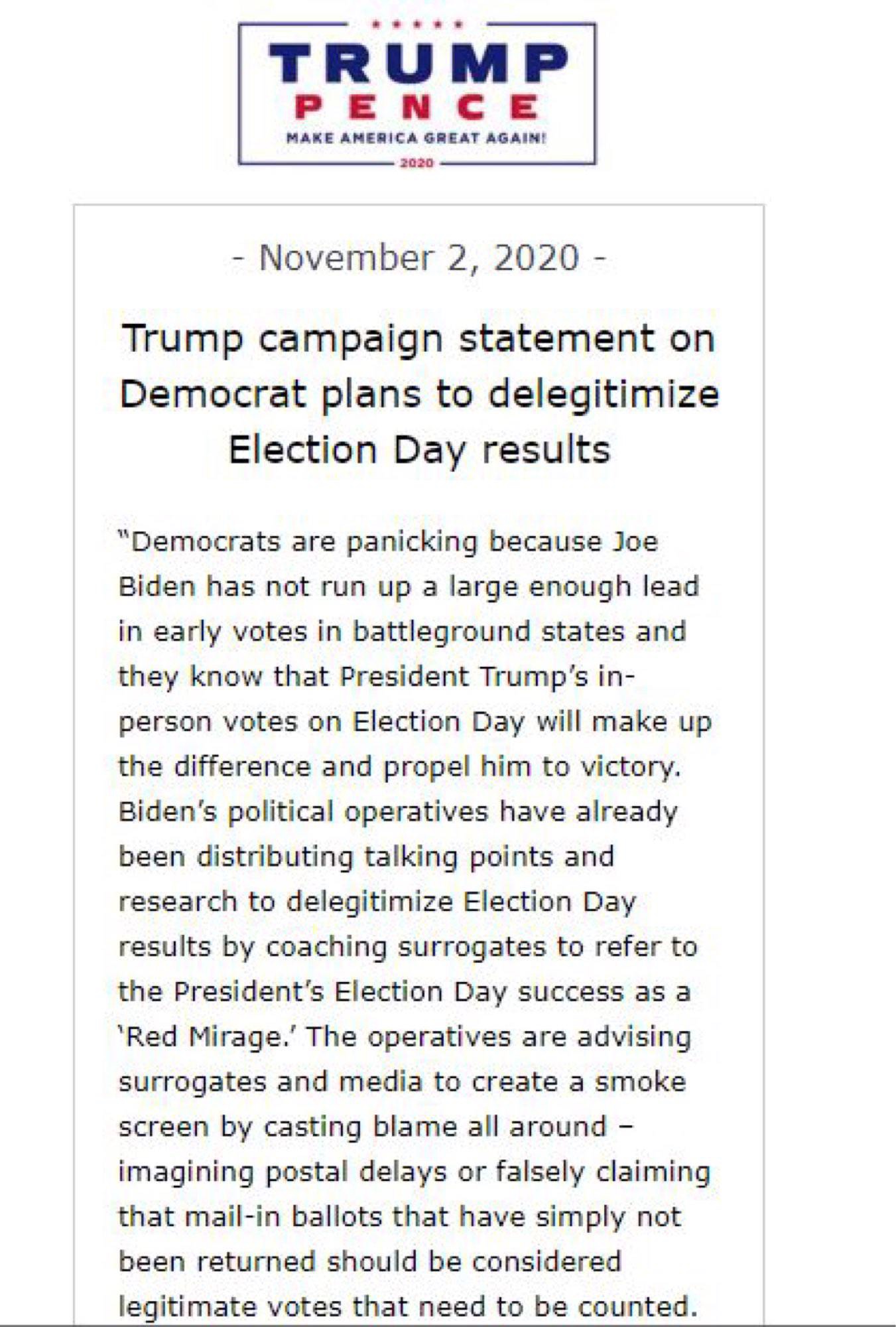 Fox News chipped in too:

Some counties will not even begin the pre-canvassing process – which includes sorting, verifying and other processes that precede actually counting the vote – until Wednesday.

The undertaking is likely to take even longer after the Supreme Court ruled that Pennsylvania can accept ballots by mail through Friday, so long as they are postmarked by Election Day.

Because a higher percentage of Pennsylvanians who requested mail-in ballots are Democrats, there is the potential for a “red mirage,” which describes a situation where Republican candidates, like President Trump, may appear to have an outsized amount of support as votes are reported on Election Day – followed by a shift toward Democratic candidates in the days that follow.

“I think it’s absolutely true that more Republicans will vote in-person,” Republican Bucks County Commissioner Gene DiGirolamo told Fox News. “If you’re just announcing the results from people who voted at the polls, I think that number is going to show … [more] favor for the president than it will for Biden.”

Rep. Chrissy Houlahan, D-Pa., said that does leave the door open for confusion – though she has been publicly urging voters that they will need to exercise patience.

The Democrats will throw everything against President Trump their not going to go down without swinging.

Hopefully, Trump blows Biden out of the water with in-person voting in Pennsylvania that the mail-in voting won’t even be a factor.

Things are starting to get crazy!