President Trump in a recent letter to pro-life leaders said: “With your help, I will win re-election, ensuring we have another four years to fight in the trenches for unborn children and their mothers.”

It’s great to have a President in the White House to be a voice for the voiceless.

In the letter, our President is quoted saying to the leaders “I need your help in containing my bold pro-life leadership with Joe Biden’s abortion extremism”.

He also wrote in the letter he plans to totally defund planned parenthood of our tax dollars.

BREAKING: In a letter to the Pro-life Community, President @realDonaldTrump vows to FULLY defund Planned Parenthood of tax-payer dollars when he is re-elected in November.

Life News covered  the story and summarized the letter:

President Donald Trump released a letter to pro-life Americans today promising to continue fighting against abortion during his second term in office, saying he would “fight in the trenches for unborn children and their mothers.”

“As I seek re-election this November, I need your help in contrasting my bold pro-life leadership with Joe Biden’s abortion extremism. The Democratic Party unequivocally supports abortion on-demand, up until the moment of birth, and even infanticide — leaving babies to die after failed abortions.

Joe Biden’s embrace of this extreme position is most evidenced by his support for taxpayer funding of abortion on-demand. Forcing taxpayers to pay for abortions is an abhorrent position that must be defeated at the ballot box.

Joe Biden has doubled down on these positions with his selection of abortion extremist Kamala Harris as his running mate. With your help, I will win re-election, ensuring we have another four years to fight in the trenches for unborn children and their mothers.”

Pro-life President Donald Trump today released a letter to pro-life Americans in which he wrote, “With your help, I will win re-election, ensuring we have another four years to fight in the trenches for unborn children and their mothers.” https://t.co/VrvsKf0usO pic.twitter.com/VFljIEgdRH

The Catholic News Agency chipped in too and had this to say:

President Donald Trump released a letter Thursday touting pro-life accomplishments in his first term and commitments for a second term—but some of these commitments linger from 2016.

In the letter, released through the Pro-Life Voices for Trump coalition, Trump said he has “proudly governed as the most pro-life president in our nation’s history,” pointing to the confirmations of Supreme Court Justices Neil Gorsuch and Brett Kavanaugh as well as over 200 lower court judges, and actions including policies to prevent the use of taxpayer dollars for abortions overseas and stripping Planned Parenthood of Title X funds, and becoming the first sitting president to address the March for Life in person.

The president pledged to continue to work towards “our transformation of the federal judiciary,” signing pro-life bills—the Pain-Capable Unborn Child Protection Act, the No Taxpayer Funding for Abortion Act, and the Born-Alive Abortion Survivors Protection Act—into law, and “fully defund the big abortion industry such as Planned Parenthood of our tax dollars.”

Here is the full letter President Trump wrote below: 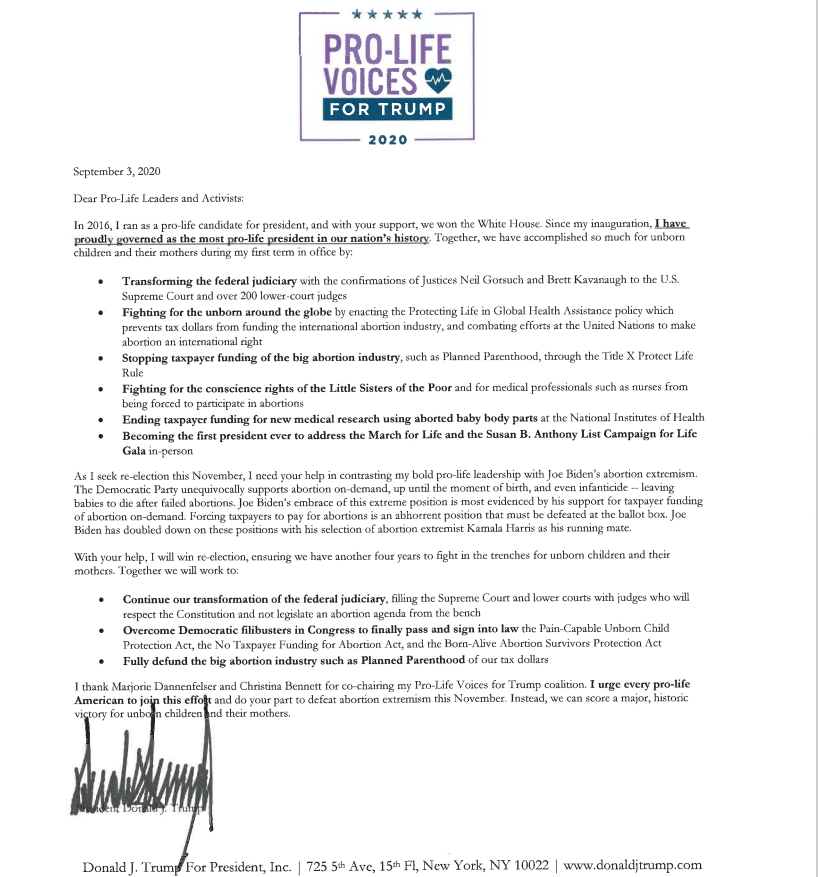