Talk about a bombshell folks, another one dropped today!

Thanks to some eagle eye researchers, an old phone transcript between Bill Clinton and Tony Blair has come to light.

It was political season for the 2000 election.

Clinton was in his second term and trying to help Al Gore win.

To do so, he made a phone call to Tony Blair and mentioned how the airline disputes were causing a real problem in our country.

In other words, it was reflecting poorly on his administration and by affiliation poorly on Al Gore.

And for some reason he thought Blair could help him get it resolved.

So he says, and this is a direct quote:

“In a political season, it would be big over here to get this open sore resolved.”

Folks, that is magnitudes worse than anything President Trump did!

While Democrats have been calling for President Trump’s impeachment over his alleged soliciting of assistance from foreign countries ahead of the 2020 election, an unearthed comment from February 2000 might show stones were being thrown from glass houses.

On his show Monday, Tucker Carlson discussed a transcript of a call between former President Bill Clinton and then-U.K. Prime Minister Tony Blair -- the same year as the election pitting Clinton's vice president, Al Gore, against George W. Bush -- during which the ex-president asked his British counterpart for a political favor.

“You’ve heard endlessly on cable news that it is unprecedented the president would seek political gain from a conversation with a foreign leader. Well, turns out, it has happened before,” Carlson said.

“Back in 2000, President Bill Clinton had a conversation with Tony Blair of the U.K. and asked him to intercede in a dispute between British Airways and two carriers. The president, at the time, was much more direct than President Trump was in his conversation. 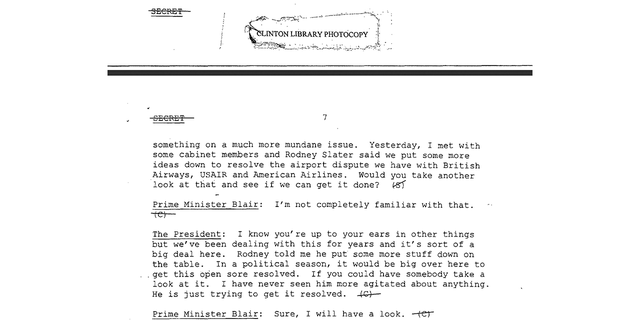 “This is Bill Clinton, and I’m quoting: ‘In a political season, it would be big over here to get this open sore resolved. If you could have somebody take a look at it.’ Tony Blair responded that he would.”

Carlson continued: “Now, is this a big deal? Not really. Is it nakedly political? Is it an attempt to use a foreign country to influence the outcome of an election in a presidential year? Yes it is, obviously.

“Incidentally, it didn’t take long for us to find that, we only had to dig through old Clinton transcripts for about 15 minutes... there are probably a lot more examples, and if we find them we will bring them to you.”

The quote referenced by Carlson can be found among a collection of declassified documents relating to Blair. It can be read in full here.

It never fails, whatever the DemonRats accuse President Trump of doing, they are ACTUALLY the ones doing it and ten times worse!