While Congress and the Biden administration write blank checks for Ukraine, National Guard troops have their last paychecks before Christmas delayed.

Senate Republicans and Democrats earlier this week agreed on a $1.7 trillion spending bill that sends $45 billion to Ukraine.

It is anyone’s guess what happens to those taxpayer dollars.

The Senate overwhelmingly passed the mammoth fiscal 2023 spending package in a burst of activity on the floor Thursday after finally nailing down an amendments deal it took all day Wednesday and into the morning to hammer out.

The vote was 68-29 in support of the 4,155-page legislation. It includes the dozen annual spending bills for every federal agency, supplemental aid for the war in Ukraine and natural disaster victims, and a series of unrelated policies ranging from retirement savings incentives to driftnet fishing regulations.

“This is one of the most significant appropriations packages we have done in a very long time,” Senate Majority Leader Charles E. Schumer said before final passage. “The range of people it helps is large and deep.”

National Guard members were informed this week that their check will not come until after Christmas.

While the corrupt Ukrainian regime gets $45 billion on a silver platter, National Guard members and their families get nothing for Christmas.

That’s how the Biden administration and significant portions of Congress operate.

It’s so wrong to treat our guys like this.

On Friday it was revealed that the Biden administration failed to pay numerous National Guard troops their final year end pay on time during the week of Christmas. The failure came after approving a controversial additional $45 billion aid package to Ukraine, and the House passing a $1.7 trillion spending plan.

“Hello gents,” began a letter sent to members of the National Guard, obtained by The Post Millennial, “if you have been tracking, the pay issue that has been plaguing the unit and the division as well.” Reports came in from Pennsylvania, Georgia, and South Carolina from troops angered and upset that their pay hadn’t yet come through.

“You are probably already tracking there are pay issues. Many soldiers were due pay today. They received LES but did not receive funds.” An LES, or a Leave and Earning Statement, is simply a pay stub, but it was not accompanied by funds.

The letter revealed that this is a “nation wide” issue, and that this issue “seems to be at DFAS [Defense Finance and Accounting Service] and is related to the CR.”

“NGB [National Guard Bureau] is currently working the issue with DFAS time now,” the letter added, stating that “we would hope the issue is rectified today or tomorrow.”

“This is unfortunate and can cause serious issues and aggravation across the formation which are understandable. Especially 2 days before Christmas,” the letter stated. “I think the messaging is important that it’s understood the issues are at the highest levels and that everyone in the Division and State are pushing for immediate resolution.”

@jamiedupree @FoxNews @wsbtv @wsbradio I was wondering if anyone was covering this. The Georgia National Guard was supposed to receive pay today from our previous drill. So, is this how “We Support Our Troops” goes? Shouldn’t paychecks already be part of allotted money? pic.twitter.com/TeRCfwXUeE 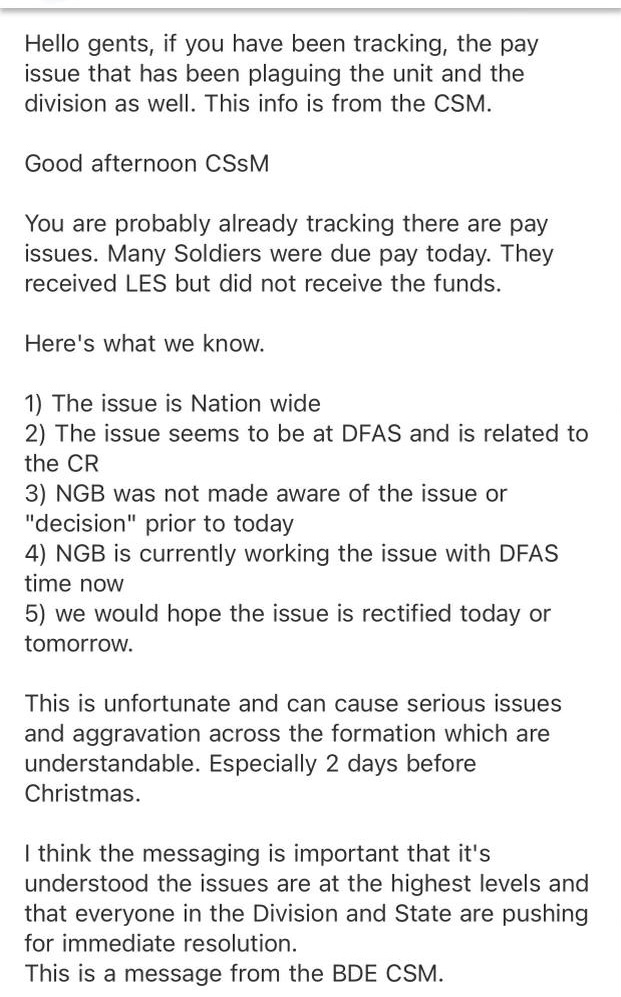