It’s not over folks…not by a long shot.

Kari Lake hasn’t given up and neither have we.

And neither should you!

After returning to AZ from huddling with Trump at Mar-a-Lago for a couple of days, Kari Lake says she will be governor: “I believe at the end of the day that this will be turned around & I don’t know what the solution will be but I still believe I will become governor.” pic.twitter.com/KFO6lXg8tO

And this from Bo Snerdly:

Kari Lake declares election loss to Dem opponent will be 'turned around' 'I WILL become governor!' via @americanwire_ – https://t.co/W2QTR9PSEH

"Whether done accidentally or intentionally, it is clear that this Election was a debacle that destroyed any trust in our elections. Arizonans…shouldn't be disenfranchised or punished for choosing to vote in person.…I will continue fighting…"—@KariLakepic.twitter.com/0FbNJZvDDQ

Zoom in to read: Her Attorney General is taking swift action too, and he appears to be one of the good guys…

Folks, we’ve got this!

Arizona gubernatorial candidate Kari Lake insisted that she “will become governor” after the Arizona Attorney General’s office demanded answers from Maricopa County regarding voter suppression that occurred on election day.

Assistant Attorney General Jennifer Wright sent a letter Saturday to the Maricopa County Attorney’s Office demanding explanations for the election issues before the results can be certified.

“The Elections Integrity Unit of the Arizona Attorney General’s Office has received hundreds of complaints since Election Day pertaining to issues related to the administration of the 2022 General Election in Maricopa County,” Wright wrote.

“These complaints go beyond pure speculation, but include first-hand witness accounts that raise concerns regarding Maricopa’s lawful compliance with Arizona election law.”

“Arizonans deserve a full report and accounting of the myriad problems that occurred in relation to Maricopa County’s administration of the 2022 General Election,” she continued.

“As the canvass is looming, and these issues relate to Maricopa County’s ability to lawfully certify election results – the Unit requests a response to the aforementioned issues on or before Maricopa County submits its official canvass to the Secretary of State, which must occur on or before November 28, 2022.”

Lake said it vindicated her decision to continue fighting, even though the Associated Press and other mainstream outlets called the race for Katie Hobbs.

BREAKING: The Elections Integrity Unit of the Arizona Attorney General’s Office has officially demanded a response from Maricopa County "pertaining to issues related to the administration of the 2022 General Election in Maricopa County." pic.twitter.com/PeYMK4F8Vq 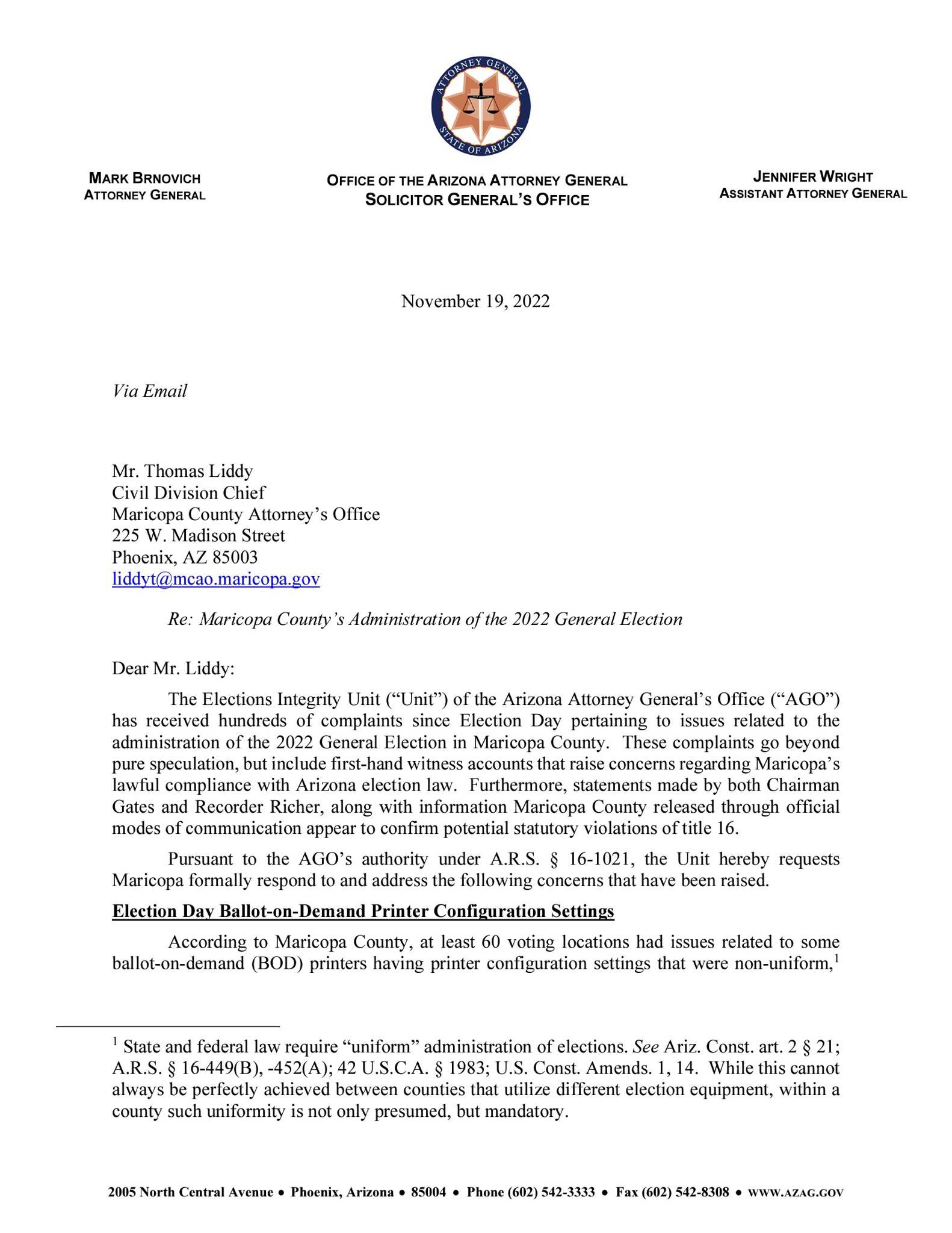 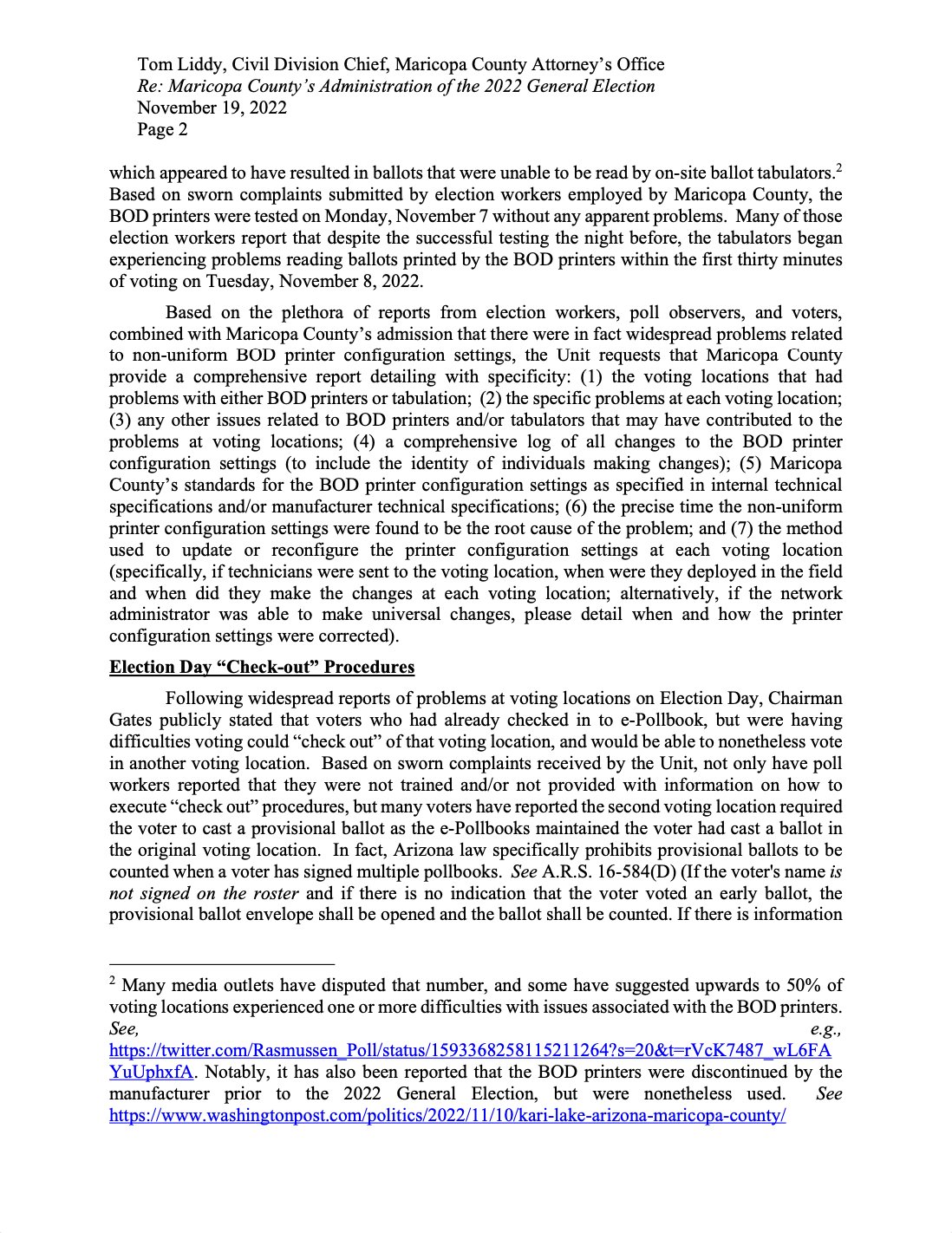 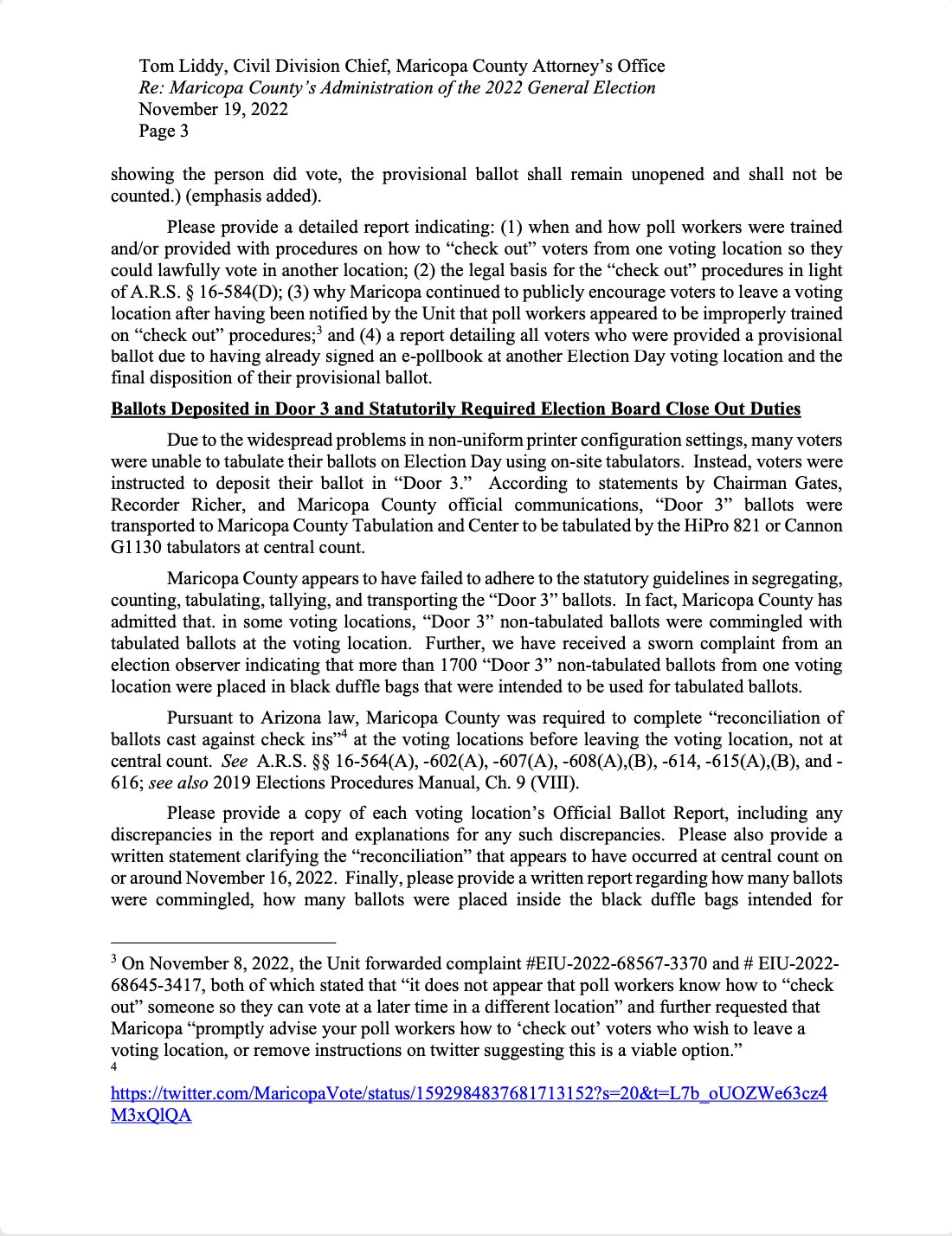 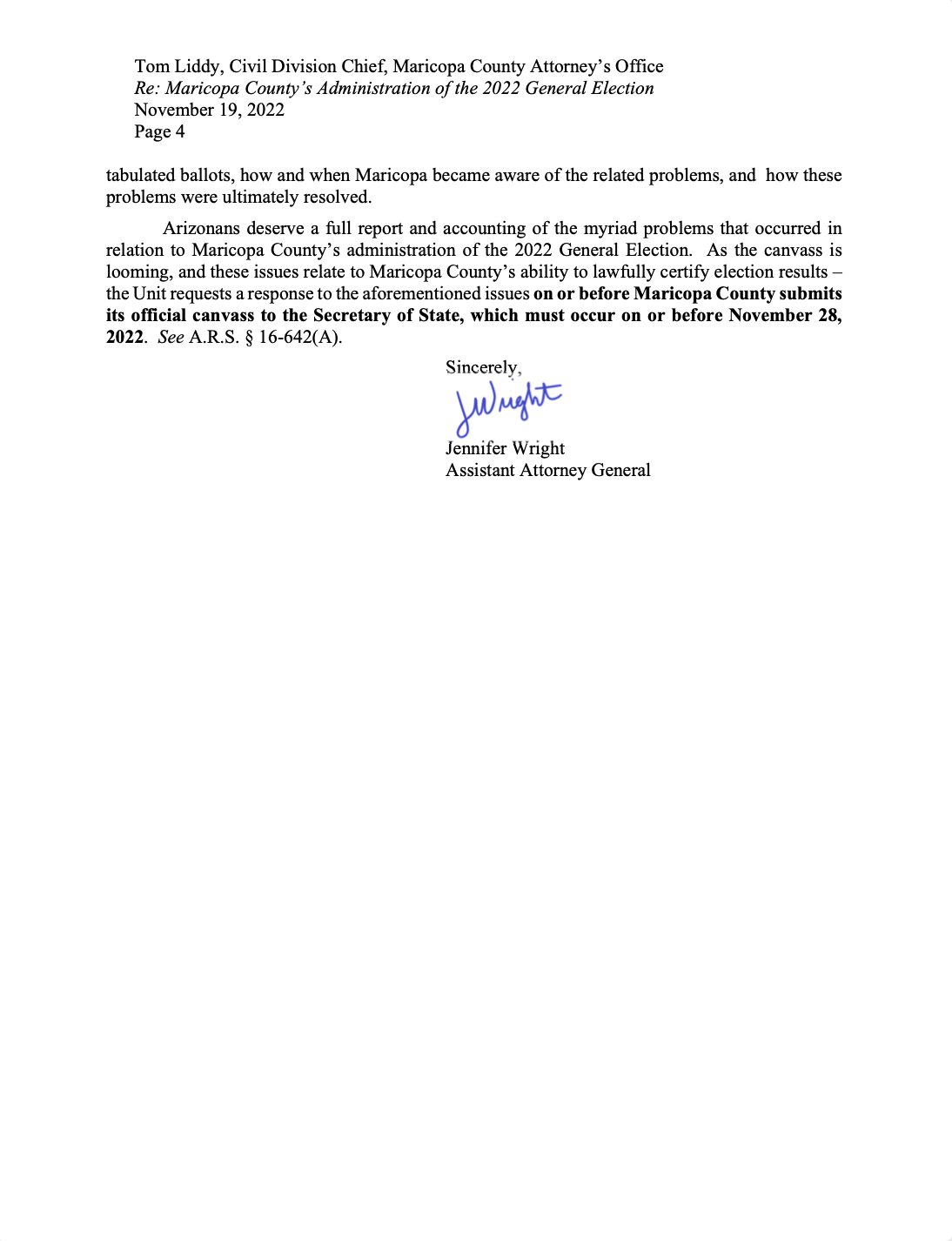 According to Maricopa County election officials, at least 60 voting locations experienced issues with their ballot-on-demand printers. The assistant attorney general is demanding an in-depth report addressing those issues, as well as the “check-out” procedures at each polling location and each location’s Official Ballot Report.

Thomas Liddy, the civil division chief at the Maricopa County’s Attorney’s Office, told Fox News Digital that his office will start gathering the materials necessary to respond to Wright’s letter.

“I saw a copy of the letter Saturday evening,” Liddy said. “I will convene with my clients and begin the process of gathering the materials necessary to respond. As you are undoubtedly aware, Ms. Wright is still working on the AG’s Final Report of the 2020 election. I am looking forward to receiving that as well.”

Lake, who was endorsed by former President Donald Trump, has claimed her voters were unfairly disenfranchised on Election Day.

“Rest assured I have assembled the best and brightest legal team, and we are exploring every avenue to correct the many wrongs that have been done this past week,” Lake said in a video Thursday. “I’m doing everything in my power to right these wrongs.”

“What happened to Arizonans on Election Day is unforgivable,” she said.

With more than 95 percent of votes tallied, Lake trails Democrat Katie Hobbs by fewer than 18,000 votes. The Associated Press has already called the race for Hobbs – but Lake, who was widely expected to win the contest, is having none of it.

‘The way they run elections in Maricopa County is worse than in banana republics around this world,’ she said in an exclusive interview, referring to the state’s most populous county.

‘And I’ll tell you what, I believe at the end of the day that this will be turned around and I don’t know what the solution will be but I still believe I will become governor, and we are going to restore honesty to our elections.’