Michele Swinick worked as an election judge in Maricopa County on Election Day earlier this week.

Swinick has come forward with information regarding her experience in Maricopa County on Election Day.

She worked Election Day as a judge at the Islamic Voting Center in Scottsdale, AZ.

Swinick reported that the center is heavily Republican, with “no party” designated voters as the second most populous demographic.

The district reportedly contained very few Democrats, since Swinick checked in very few of them on Election Day.

“Swinick says that the tabulators all worked ‘perfectly’ during the test the night before the election,” Uncover DC reports.

“The problem with scanning began immediately with the first ballots.”

“Poll workers estimated about 1 in 10 ballots were being read for the first three hours of voting,” Uncover DC added.

“Voters were given options to either spoil their ballots and try again or drop them into a different section called ‘Door 3.'”

Kari Lake won by a landslide.

Hobbs pulling a victory from her Bidenesque basement campaign is patently bullshit pic.twitter.com/Yn9QmARpv5

Michele Swinick worked at a center in a heavily Republican district. According to Michele, the tabulators worked perfectly well the night before the election. Then on Election Day they quit working.https://t.co/vzIPbkYYGj

As per Swinick, their inspector had to empty the ballots from “Door 3” three times throughout the early afternoon because of the volume of ballots. Typically, ballots aren’t supposed to be removed from that box until polls close, but they made an exception because the box was jamming and became too full.

Swinick reports that the technician came to the center between 3:30 pm and 4:00 pm MT and rebooted the machines. After this, there were no further issues with ballots being run through tabulators. She reported that one of the poll workers told her, “Everything is now going smoothly with the tabulators.”

Per Swinick’s inspector, an offsite supervisor had advised “Because of the situation” to put all “door 3” ballots that had not been scanned through a tabulator into a separate black bag and to label them “misreads.” As a judge, Michele told UncoverDC that she personally signed the sticker placed over the bag’s zipper, and then these bags were sent to the tabulation center to be counted. Michele informed us that the normal process for a ballot that is “unread” is for poll workers to run the ballots through the tabulators one more time before sending them to the center. As per Swinick, this was not done.

The County had set up a website to give voters the ability to check that their vote was counted. The problem is Michele has proven that the website isn’t correct and seems to be using a voter’s “check in” as evidence their vote was tabulated rather than the actual tabulation of the vote. Michele offered her first-hand proof of this.

“My roommate ran his ballot through the tabulators 15 times as one of the 1st voters at the Islamic Center. It did not read the ballot. He was forced to drop it in door #3.

About an hour after I arrived home at 9 pm MT, my roommate checked the website to see if his vote had been counted. The website reported it was. It is mathematically impossible for his vote to have been counted by then since only an hour before, I left the center, and the ballots had not been taken from the center to the meeting point where the ballots are hand exchanged to another transport team, which takes them to the tabulation center. For his ballot to have been counted, it would have also needed to be sorted and hand-counted by a team at that center and reported into the website —all within that hour.

In the case of In Person/Day of Voting, this proves the reporting of his ballot being received & counted is actually based on his being checked into the Voting Center and him receiving a ballot to be cast—NOT his ballot being scanned and read through the tabulator or hand counted at the tabulation center.”

According to the report, Swinick has been threatened by her supervisor for speaking out about what she witnessed. 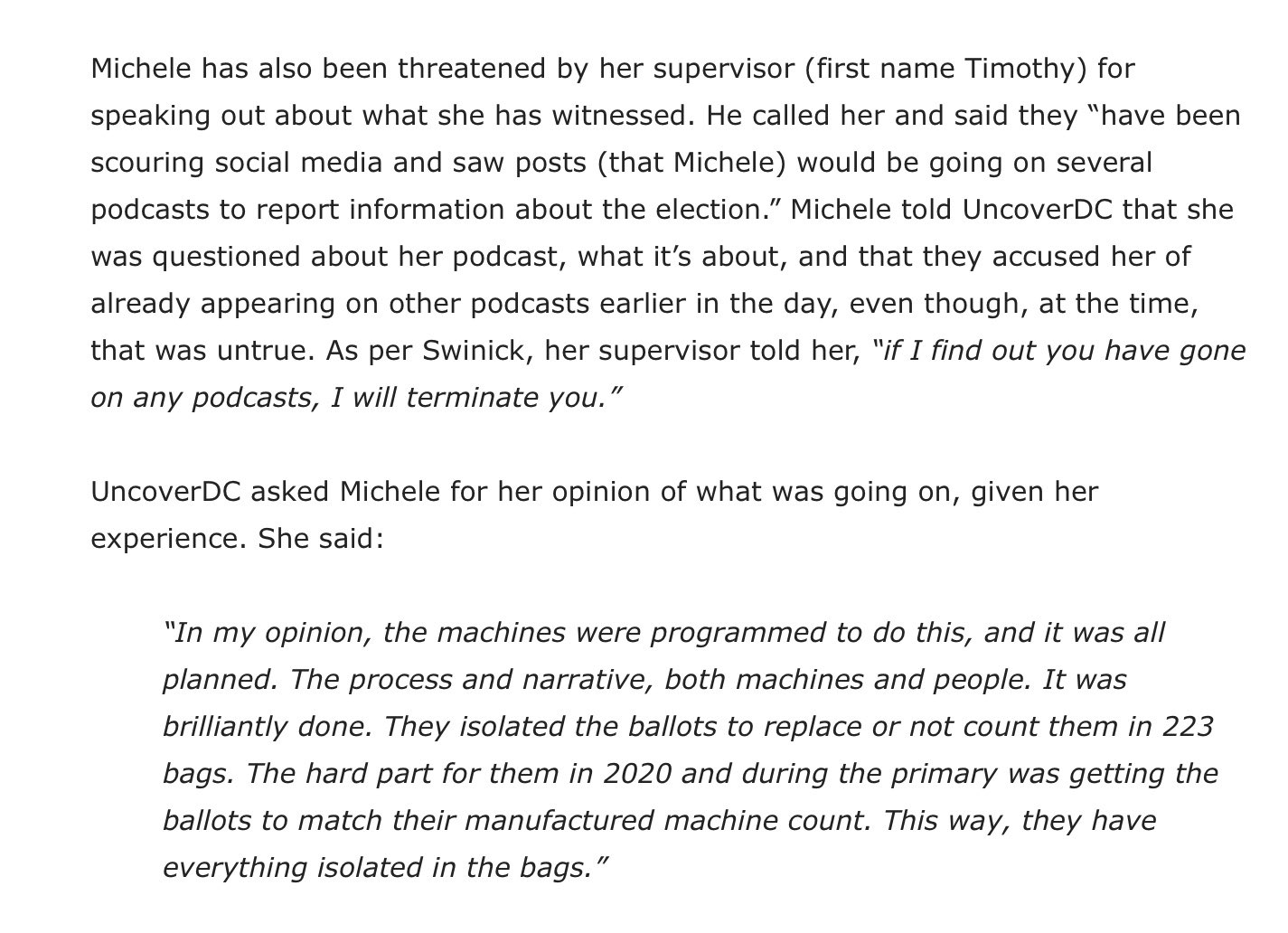