What @GovRonDeSantis and @GregAbbott_TX are doing isn’t clever, it’s cruel.

I’m formally requesting the DOJ begin an immediate investigation into these inhumane efforts to use kids as political pawns. pic.twitter.com/x2sBa06nSw 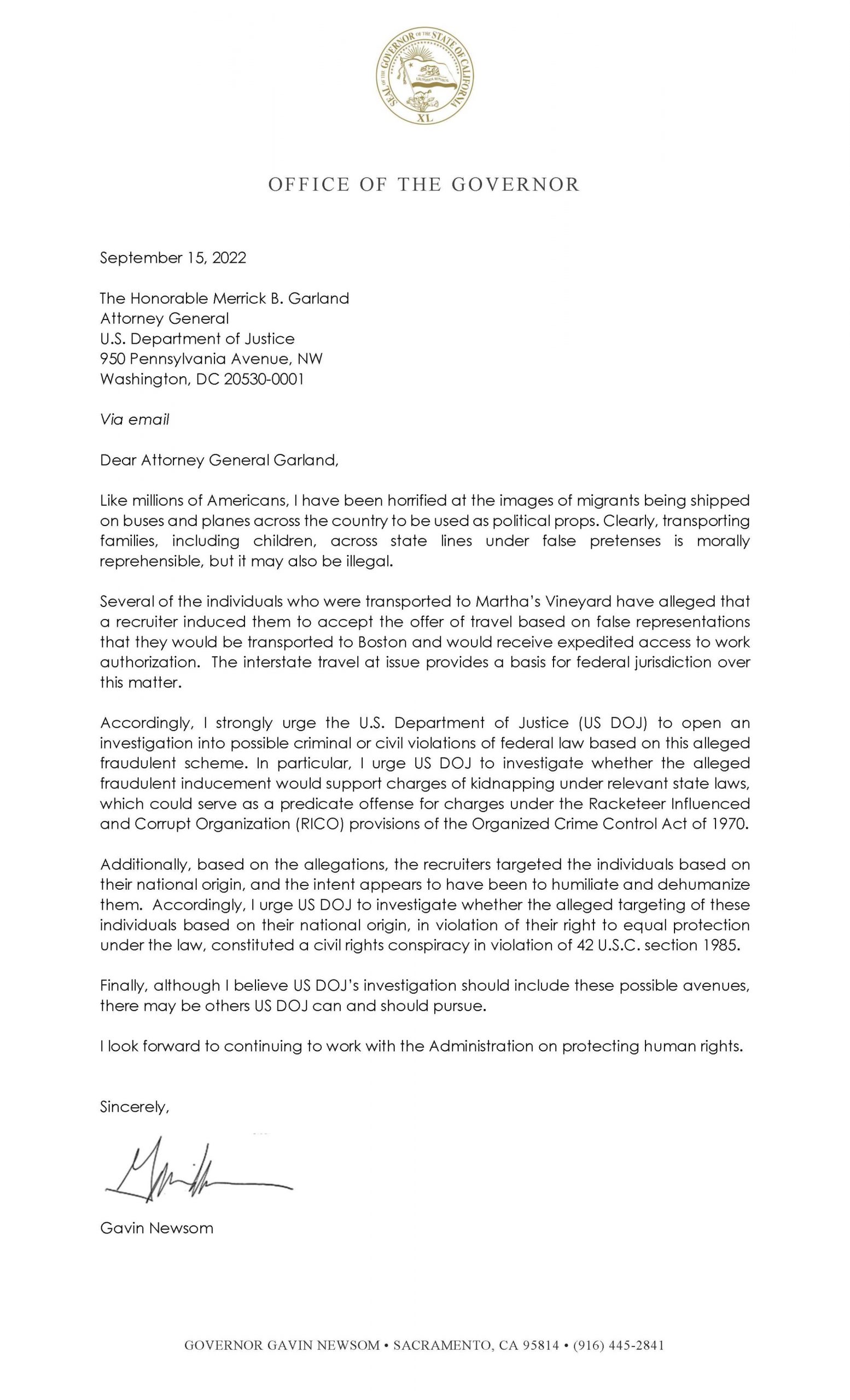 The flights were coordinated by Florida Gov. Ron DeSantis.

Newsom based his charges on an NPR report that some of the migrants said they were told they were being flown to Boston and would receive help with work papers.

NPR was able to interview three of the migrants late Wednesday. “They (the migrants) told us they had recently crossed the border in Texas and were staying at a shelter in San Antonio,” NPR’s Joel Rose said on Morning Edition.

The migrants said a woman they identified as “Perla” approached them outside the shelter and lured them into boarding the plane, saying they would be flown to Boston where they could get expedited work papers. She provided them with food. The migrants said Perla was still trying to recruit more passengers just hours before their flight.

Andres Duarte, a 30-year-old Venezuelan, said he had recently crossed the border into Texas and eventually went to a shelter in San Antonio.

“She (Perla) offered us help. Help that never arrived,” Andres said. “Now we are here. We got on the plane with a vision of the future, of making it.” He went on to explain why he boarded the plane with so little information in hand. “Look, when you have no money and someone offers help, well, it means a lot.”

In Martha’s Vineyard, the migrants are staying at a church shelter while local authorities and nonprofit organizations figure out what’s going to happen next. Lisa Belcastro, who runs a homeless shelter on the island, said resources were initially scarce.

“Everything from beds to food to clothing to toothbrushes, toothpaste, blankets, sheets. I mean, we had some of it … but we did not have the numbers that we needed.”

Most of the arrivals spoke little or no English, and Spanish-speaking high school students were pressed into service as interpreters.

Edgartown Police Chief Bruce McNamee said many of the migrants were confused.

“We have talked to a number of people who’ve asked, ‘Where am I?’ And then I was trying to explain where Martha’s Vineyard is.”

AP's Darlene Superville: "Is the administration looking into whether bussing migrants around the country is legal?"

KJP: "So…there is a process in place [at the border]…Republican governors interfering…using migrants as political pawns is shameful, is reckless, &…wrong." pic.twitter.com/kKSrX80ddP