During the FBI’s lawless raid on President Trump’s Florida residence, federal agents wouldn’t let anyone, including Trump’s lawyers, observe the areas they ransacked.

“The FBI and others from the Federal Government would not let anyone, including my lawyers, be anywhere near the areas that were rummaged and otherwise looked at during the raid on Mar-a-Lago,” Trump said Wednesday on Truth Social.

“Everyone was asked to leave the premises, they wanted to be left alone, without any witnesses to see what they were doing, taking or, hopefully not, ‘planting.’ Why did they STRONGLY insist on having nobody watching them, everybody out? Obama and Clinton were never ‘raided,’ despite big disputes!” 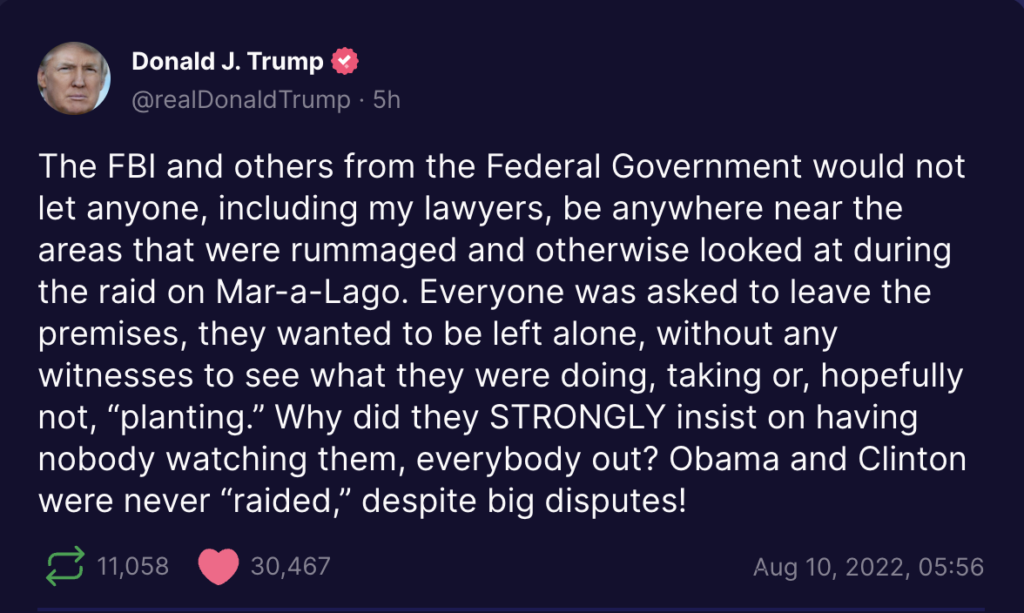 Eric Trump said that the security cameras at Mar-a-Lago caught FBI agents behaving improperly during Monday’s raid, alleging that investigators were accessing parts of former President Donald Trump’s Florida residence that they “shouldn’t have been.”

In an interview with DailyMail.com, Eric Trump said that because staff refused to turn off the surveillance cameras at the request of the FBI, the Mar-a-Lago cameras captured agents raiding areas that they weren’t authorized to.

“There’s 30 agents there,” he recalled on Wednesday. “They told our lawyer…’You have to leave the property right now. Turn off all security cameras.’”

Eric Trump said that the FBI refused to give Trump’s lawyer, Christina Bobb, a copy of the search warrant but “showed it to her from about 10 feet away,” DailyMail.com reported. He also said he would be “thrilled” to find out if there was a valid reason for the search.

Bobb said the supporting documentation to the warrant was sealed and that Trump’s team was still deciding whether or not they would go to court to ask for its release.

“It was very, I would say, thin, and as you can tell, it went from public records,” Bobb told Real America’s Voice on Tuesday.

“The affidavit, the supporting documentation of what the probable cause was to obtain the warrant, has been sealed, so we’re not allowed to see that. We have to go to court to request the judge to release that, which may or may not happen.”