A drag queen named “Brita Filter” (AKA Jesse Havea) walked down the aisle as if the house of worship was a fashion runway.

“Dear Lord, which circle of Dante’s inferno is this? This meant to be the house of God but…” a Twitter account noted.

Dear Lord, which circle of Dante’s inferno is this? This meant to be the house of God but…pic.twitter.com/KROgzH8W4j

“Students felt pressure to join in, dance, and celebrate, while Teacher Uyen Nguyen took the opportunity to announce their resignation over improper pronoun usage,” The Post Millennial reported.

“There was tons of social pressure to dance along and pretend like it was normal for sure,” a student who asked not to be named told The Post Millennial, “whether it be people tapping on shoulders and telling them to stand up or just a collective staring contest at whoever wasn’t totally participating.”

The event was led by the school, the reverend, and the students and faculty advisors for Spectrum, the school’s LGBTQIA+ affinity group. The politically themed chapel, which was mandatory for all students in grades 9-12, apparently ran long.

“Immediately upon entering there was a person handing out stickers with Pride flags on them, unironically saying ‘take one or you’re homophobic.'”
According to multiple students who asked not to be identified by name, Havea as Brita entered from the back of the church, after remarks by the chaplain and a faculty member, as the disco hit “I Will Survive” echoed through the nave. Clad in electric orange go-go boots and a high-hemmed blue babydoll dress, he proceeded to strut and sashay down the aisle as if it were a runway, as some students began dancing in the pews. Others did not want to join in.
One student reported that as the performer approached the altar, he was joined by more dancing students, some of them “twerking.” Bringing drag into classrooms and schools has been touted by its proponents as a way to “queer” education.

“I wondered, is this really happening in a chapel?” the student said. Another observed “tons of social pressure to dance along and pretend that this was normal for church.”

As Infowars noted, the church also evidently promoted the event on their website. 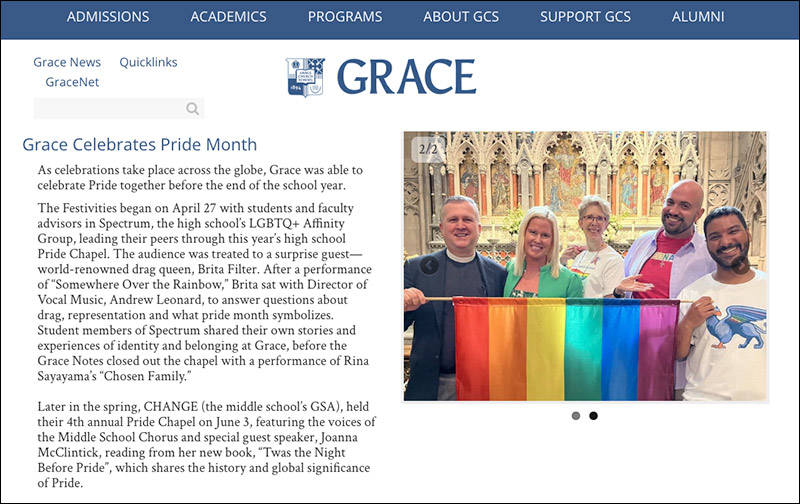 “After a rendition of ‘Somewhere Over the Rainbow,’ Brita Filter reportedly discussed his nationality and pansexuality, all the while repeatedly saying he was ‘fabulous and talented and beautiful,’ noted one student,” Infowars added.