Abe, Japan’s longest-serving prime minister, was giving a speech in the city of Nara when gunfire was heard around 11:30 a.m. (10:30 p.m. Thursday ET).

He’s reportedly showing no vital signs after being taken to the hospital, Japanese media report.

He appeared to have no vital signs, local fire officials said.#BreakingNews #Japan

#UPDATE Japan's former prime minister Shinzo Abe is showing no vital signs after being taken to hospital following an apparent attack at a campaign event in the Nara region, Japanese media report pic.twitter.com/6UaZxWwn0I

Medics said Abe was in a state of cardiopulmonary arrest.

A Japanese broadcaster confirmed the former prime minister passed away. 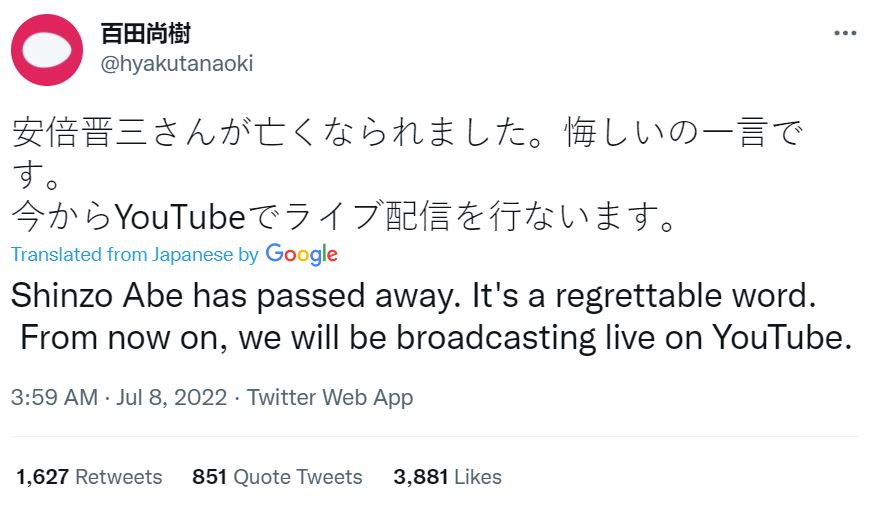 Translated: [Breaking News JUST IN] Former Prime Minister Shinzo Abe dies and is shot by a gun during a speech in Nara Prefecture.

The suspect appeared to attack Abe with a “homemade” shotgun.

The middle-aged man aimed his shotgun at Abe and fired two shots. The first shot seemed to miss, but the man didn’t flee. He squatted down and waited to be arrested, as per NHK.

Here are stills of the attacker being apprehended. pic.twitter.com/MFvunBC1qc

NOTE: Video not graphic, but viewer discretion is advised pic.twitter.com/BZNGHP78ds

Former PM of Japan Shinzo Abe shot dead.
Visuals of the spot just after the incident.pic.twitter.com/vY6okpMrTU

Here’s a picture of the “homemade” shotgun reportedly used in the attack.

The "homemade" shotgun used in the Abe assassination attempt. pic.twitter.com/BtP3Hog3rL

President Trump responded to the news of the assassination attempt against the former Japanese prime minister.

Shinzo Abe is a Japanese patriot and a great friend of the United States! https://t.co/GFJsh3oSco pic.twitter.com/9bBnabsWtq

Japan’s former prime minister Shinzo Abe has died in hospital after he was shot at a political campaign event.

Abe was shot at twice while he was giving a speech on a street in the city of Nara on Friday morning.

Security officials at the scene tackled the gunman and a 41-year-old suspect is now in police custody.

The suspect, named as Tetsuya Yamagami, admitted shooting Abe with a homemade gun, and said he had a grudge against a “specific organisation”, police said.

Several other handmade weapons, similar to those used in the attack, had been confiscated after a search of the suspect’s house, police officers told a news conference.

Explosives were also found at the home and police said they had advised residents to evacuate the area.

Japan has some of the strictest gun control laws in the world!

From the U.S. Department of Justice:

Other than the police and the military, no one in Japan may purchase a handgun or a rifle. Hunters and target shooters may possess shotguns and airguns under strictly circumscribed conditions. The police check gun licensees’ ammunition inventory to make sure there are no shells or pellets unaccounted for.