As rising inflation continues to poll as a top concern for Americans, MSNBC guest Michelle Singletary – a Washington Post columnist, told Americans to suck it up.

Is this the new Democrat strategy as the midterm elections inch closer?

Many Americans face greater difficulty putting gas in the car and food on the table due to skyrocketing inflation, but they need to “stop complaining?”

I’d like to see how that works in the voting booth this November.

“There is a great deal of Americans where it is uncomfortable that they’re spending more, but they are not gonna go under. You’ve got to stop complaining … you still have your job … so I’m gonna need you to calm down and back off,” Singletary said.

MSNBC guest: "There is a great deal of Americans where it is uncomfortable that they're spending more, but they are not gonna go under. You've got to stop complaining … you still have your job … so I'm gonna need you to calm down and back off." pic.twitter.com/qjii2nWzLs 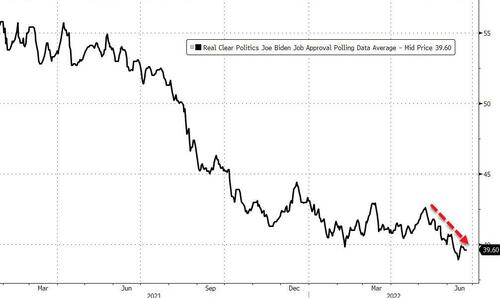 A new poll has revealed President Joe Biden’s approval rating fell to a new low amid expectations of economic recession. According to data collected by Civiqs, Biden’s job approval fell to 32 percent in June, which down from 34 percent in May. This marks its lowest level since the Democrat took office last year.

A whopping 57 percent of respondents said they do not approve of Biden’s job performance. In addition to this, the President’s net approval ratings are now negative in 48 states, which is up from 47 states last month with the exception of Hawaii and Vermont. Biden now has a national net approval rating of -25 and most respondents are concerned about his poor handling of the economy.

Inflation remains a top priority for a vast majority of Americans.

The recession is here:

I don’t think telling Americans to ‘calm down’ and ‘stop complaining’ will work in the favor of Democrats come November.

The disdain these folks have for the average American is palpable. https://t.co/b30sB2uHTK

“You’ve got to stop complaining” or what? At my job we are having to increase prices on everything just to make a profit. You do know small businesses focus on profits and losses? https://t.co/slgz66r2g6

Don't like inflation? Shut up. That's what these people think of you. You will own nothing and be happy. #inflation #recession https://t.co/Rk3EuKYUEk