“The US government is quietly encouraging agricultural and shipping companies to buy and carry more Russian fertilizer,” according to Bloomberg.

People familiar with the situation report that sanction fears have led to a sharp drop in supplies, fueling spiraling global food costs.

Well, it didn’t take a rocket scientist to know that would happen.

Are Democrats making a desperate attempt to repair the damages they’ve caused as the November midterm elections inch closer?

WELL LOOK AT THIS..

Biden is quietly encouraging agricultural companies to buy Russian fertilizer, due to concerns about food supplies. The Democrats must be worried about civil unrest and the November elections. Biden's ratings have dropped even further.https://t.co/RSmmsnol36

“The effort is part of complex and difficult negotiations underway involving the United Nations to boost deliveries of fertilizer, grain and other farm products from Russia and Ukraine that have been disrupted by President Vladimir Putin’s invasion of his southern neighbor,” Bloomberg added.

“US and European officials have accused the Kremlin of using food as a weapon, preventing Ukraine from exporting. Russia denies that even as it has attacked key ports, blaming the shipment disruptions on sanctions imposed by the US and its allies over the invasion.”

With Moscow being a key supplier of fertilizer, the US and EU have included exemptions on sanctions against doing business with Russia – however many shippers, banks and insurers have been cautiously staying away out of fear that they might accidentally run afoul of the rules in an expensive lesson. Now, US officials are trying to encourage activity in the space.

Exports of Russian fertilizer are notably down 24% YTD.

As Bloomberg notes, the new push by Washington underscores the current challenge facing the west – which seeks to punish Russian President Vladimir Putin over the invasion of Ukraine, while also easing pressure on economy-damaging food inflation during an election year in America. Since the war began in February, already-high inflation spiked further – a point Putin regularly makes while railing against sanctions.

Earlier this month, the Biden admin sent a representative to UN-led talks with Moscow regarding supply issues – as insufficient deliveries of fertilizer could also negatively affect next year’s crops.

The Kremlin has insisted that the US provide assurances to global buyers that they won’t face sanctions, suggesting it as a condition to unblock any shipments of Ukrainian farm products now. 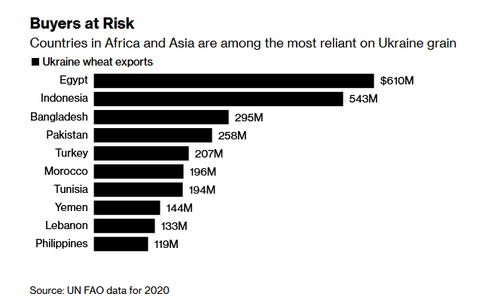 “For Russia, it’s really important that U.S. authorities send a clear signal that these deals are permitted and in the interest of global food security and they shouldn’t refuse to carry them out,” said Ivan Timofeev, a sanctions specialist at the Kremlin-founded Russian International Affairs Council.

Russian grain exports are down only 14%, while wheat exports doubled in May, according to the Russian grain union, while more than 25 million tons of Ukrainian grains, sunflower oil and other commodities are stuck in Ukraine due to security fears over Black Sea ports and shipping lanes. With the new harvest beginning, officials caution that the situation will become more dire.