The city of San Diego has catapulted off a cliff in woke climate change stupidity.

City officials, without consultation or announcement, redesigned a two-lane road along a stretch of Gold Coast Drive in the Mira Mesa suburb that accommodates two lanes of bike traffic but only one center lane for vehicles.

But the road remains a two-way street for vehicular traffic, throwing every ounce of common sense out of the window.

The city’s reckless actions have even confused and angered some liberal residents. 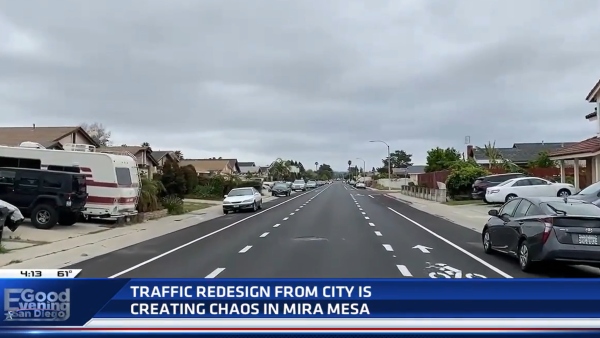 But it isn’t a one-way road; it’s still a two-way traffic road with a single lane. Vehicles are expected to dodge each other as they drive toward head-on collisions.

“This is not safe for anybody. I don’t know why any city would do something like this,” said local resident Tommy Hough, who is running for city council.

“Gold Coast is essentially two streets – the length from Black Mountain Rd. to Camino Ruiz (east) is the worst road in the city. Everyone here knows it. Not good for bicycles or cars. The shorter length from Camino Ruiz to Parkdale (west) is newer and regularly resurfaced,” he noted further in a tweet.

Definitely agree on how bad Gold Coast is – I rode here last week after a neighbor sent me a note about what was being done. I’m curious tho, considering you’re calling on the city to restripe the street: what would you do differently? pic.twitter.com/9xcsbXZGAG

We're asking the city to simply restore the previous alignment on this heavily-used arterial. The stenciled bicycle person is imperfect, but (most) folks know how to negotiate it. Let's collaborate on truly safe lanes or corridors, and better utilize avail. street opportunities.

Residents told KUSI’s Dan Plante that it’s not only laughable, but they think the new design is much more dangerous than it was before. To make matters worse, the City of San Diego didn’t consult or notify anybody in the community before they did it.

As KUSI’s Dan Plante reports, this is just the latest example of the City’s, “Climate Action Goals Gone Wild.”

Plante says the Mira Mesa area is being used by the City of San Diego to experiment with their Climate Change initiatives.

The only Republican on San Diego City Council, Chris Cate, represents this area, and told KUSI he was left out of the loop about this shocking redesign.

KUSI’s Dan Plante took a short video driving down the road, Gold Coast Drive, which you can see below: