The self-declared “top Children’s Hospital in Oregon” has a document teaching boys how to “tuck their penis, testicles, or both out of the way” in order to make “the genital area look smoother and flatter.”

Although “tucking” is clearly only relevant for males, the guide states, “People of all genders can tuck.”

. @OHSUDoernbecher Ohio State University Doernbecher Children's Hospital has detailed instructions and pictures to help your son tuck his penis with tape or without tape so that his crotch looks girly smooth.

Friendly reminder that doctors can be pedophiles too. https://t.co/133VD81u8w pic.twitter.com/MpUzkmi0M3

The document describes risks of tucking that include “urinary tract infections, problems with urine flow and twisting
or inflammation in the testicles.”

Yet, it’s intended to teach “safe tucking” to make the “genital area look smoother and flatter.”

Under the section, “How to Tuck,” the children’s guide explains they can “use tape,” wear spandex or pantyhose, or “put your testicles inside your body.”

The document tells kids to press gently on their testicles and use “two or three fingers, and try to guide them into the inguinal canals. This can feel strange at first, possibly even uncomfortable. You should not feel faint or nauseated or have extreme pain. If you do, take a break and try again later.”

A graphic diagram was provided in the children’s hospital material. 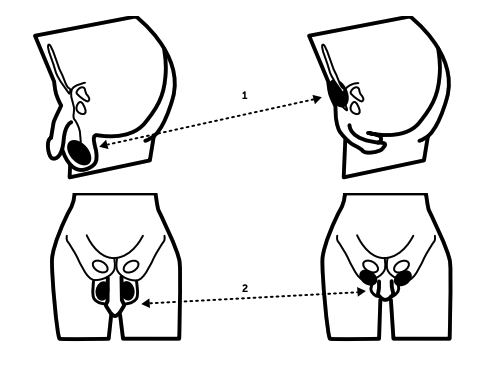 The instructions even warn against the possibility of tucking making the kids “aroused,” explaining, “Once the testicles are tucked, pull the penis back between your legs. If you find yourself getting aroused, take a break and try again later. An erection will make it impossible to tuck.”

The children’s hospital document directs minors looking for “tucking clothing” to an online store featured in Planned Parenthood guides, an Etsy shop with underwear made for tucking, and a Portland sex toy and pornography shop.

As stated in the OHSU tucking document:

Where to buy tucking clothing

Origami Customs is an online company that sells gaffs and underwear designed for tucking. They have been featured in Planned Parenthood guides for people seeking gender-affirming treatment.

LeoLines is an Etsy shop that offers affordable gaffs and underwear for tucking. They have positive reviews from trans feminine folks. They also make products that are designed specifically for children with tucking needs.

In the Portland area

SheBop is a sex-positive shop in Portland. They sell gender-affirming clothing items as well as sex toys, videos and more. The shop is for people age 18 and older, but they offer appointments before or after hours for younger shoppers.

The Doernbecher Children's Hospital in Oregon has been directing its underage gender clinic patients to an 18+ sex toy shop that will make special "after-hours" appointments for minors.

The information was provided in a penis "tucking" handout.https://t.co/v7StGc1ECg

democrats, save our children, Sex Crimes