And it must be stopped dead in its tracks.

Digital vaccine cards are a trojan horse that will drag humanity to a life of digital enslavement.

Sadly, the national standard vaccine card isn’t exclusive to blue states. Some red states have jumped onboard to this tool of medical tyranny.

Thus far, 21 states, the District of Columbia, and Puerto Rico provide access to the SMART Health Card, a digital proof of inoculation developed through the Vaccination Credential Initiative (VCI).

The VCI features a coalition of public and private stakeholders that includes Microsoft, Salesforce, Oracle, the Mayo Clinic, and other health and tech giants.

A National Vaccine Pass Has Quietly Rolled Out – And Red States Are Getting On Board https://t.co/jq7g3zMJws pic.twitter.com/Api5mVAcmJ

There is already an impressively widespread availability of SMART Health Cards in the U.S. More than 200 million Americans can now download, print or store their vaccination records as a QR code. When the QR code is pulled up, only the individual’s name, date of birth and vaccination information is visible. No other medical information or personal data is shared. This code is also digitally signed to ensure that the card was issued from a verified location and to prevent forgery.

For individuals, the benefits of having access to personal digital vaccine record is three-fold. First, it’s a huge plus for travel in the U.S. and abroad.

Many indoor cultural attractions and performance venues in the U.S. require proof of vaccination. “We believe it gives people peace of mind when the folks around them are unlikely to be contagious,” says Gus Warren, CEO of Bindle, a health verification app that allows venues to verify the vaccination status of patrons.

Bindle’s growing list of clients spans more than 30 states, from blue strongholds like California and New York to red leaners like Texas, Florida, Arkansas, Missouri and Georgia. At the Kennedy Center in Washington, D.C., for example, there’s a Bindle lane that offers fastpass-like efficiency in scanning QR codes from a number of vaccine verification platforms used around the world.

“The SMART Health Card is such an important development and the Vaccine Credential Initiative has been phenomenal in getting this out there,” says Warren, noting that while Bindle recognizes several interoperable standards, the SMART Health Card has emerged as the most important. “Absolutely, it has become the standard across the U.S. and North America.”

“And at an international level, we are continuing to see intense interest in a coordinated international approach,” says Anderson. “And that has not diminished at all. I think quite the opposite.”

To wit: Every Canadian province has now adopted SMART Health Card verification, as has Aruba, the Cayman Islands, Singapore and Japan. And in Africa, the SMART Health Card has rolled out in Kenya and Rwanda, just the first of 32 African countries in the “Smart Africa” alliance to adopt a digital-first approach to healthcare records.

The following chart shows which states provide access to the SMART Health Card: 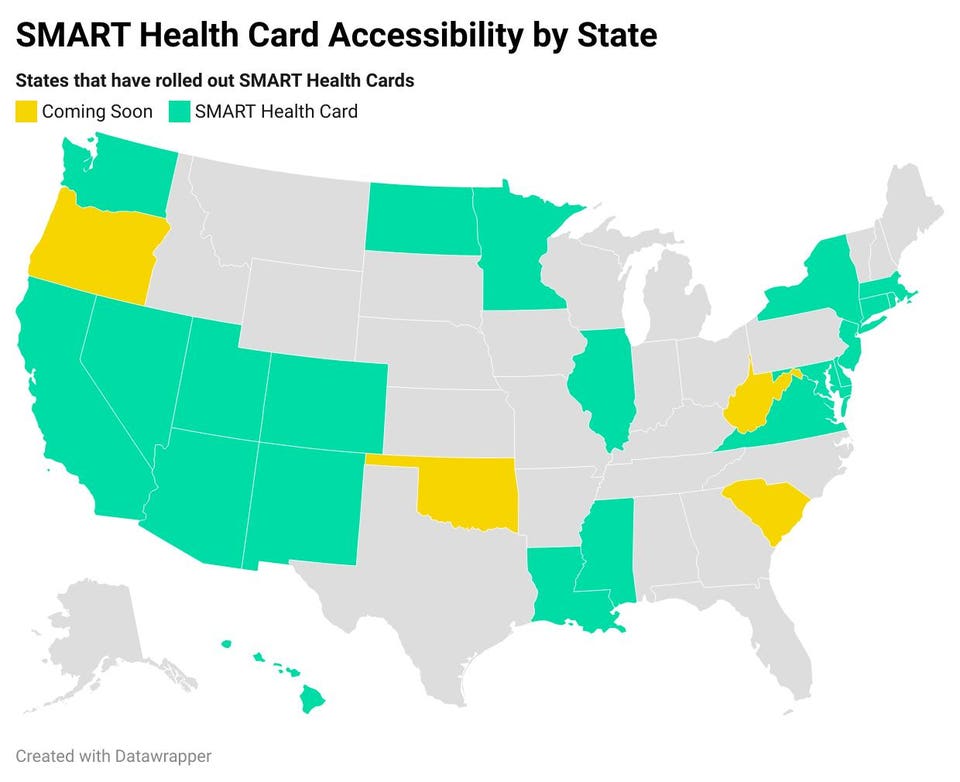 Forbes made this nauseating case for red states to adopt the SMART Health Card:

The second argument for adopting a digital vaccine verification system is the one swaying red-state governors: Having digital access to personal health records empowers the individual.

More than a dozen states have launched their own SMART Health Card-based portals. At least seven others — including Arizona, Mississippi and West Virginia — have turned to a third-party, MyIRMobile, to issue SMART Health Cards. Minnesota has chosen Docket, another third-party option.

“This isn’t a passport,” South Carolina’s director of immunizations told Politico. “This is essentially a Covid card that people get at their convenience because it’s their record.”

Utah was one of the first red states to get on the SMART Health Card train. For former Utah Governor Mike Leavitt, a Republican who was the Secretary of Health and Human Services in the George W. Bush administration, the issue boils down to individual rights. “There’s always a question about who owns the data and the rights to access that data,” Leavitt said at a recent global forum on SMART Health Cards. “But one thing is unchallengeable. And that is, I own a right to have my own data. And to have it in a form that I can present it conveniently for the kinds of things I want to do.”

“The idea of being able to have trustworthy copies of your own health records is not a red or blue state issue,” echoes Anderson. “ It is an individual empowerment of your own health data. What we’re going to see over the next month is a growing number of red states recognizing and appreciating the importance of empowering their individual citizens in their states.”

Nothing is empowering about showing your private data or medical information to anyone for participation in society.

Digital health cards will utilize this information for an unprecedented level of government and corporate invasion of our privacy and constitutional rights.

Any state that agrees to the SMART Health Card is a sellout to its people, especially for red states that claim to stand for individual rights.

It’s digital slavery and traps us into the globalist biomedical security state.