21-year-old Alexandros Lampis, an attacking midfielder for Ilioupoli FC, collapsed due to sudden cardiac arrest in the 5th minute during Wednesday’s match against Ermionida.

There was no defibrillator or ambulance at First Municipal Stadium, and doctors rushed onto the field in attempts to revive him.

While an ambulance arrived 20 minutes later, the young player tragically passed away on the pitch.

Both sides were emotionally shaken, and the match was called off shortly after the medical emergency.

Footballer dies aged 21 after cardiac arrest with no defibrillator or ambulance at stadium https://t.co/eY9azt5M0Y pic.twitter.com/6zue9kb6gc

The sad news of the death of the young football player was announced by Ilioupoli, who made the tragic event known by posting on Facebook … 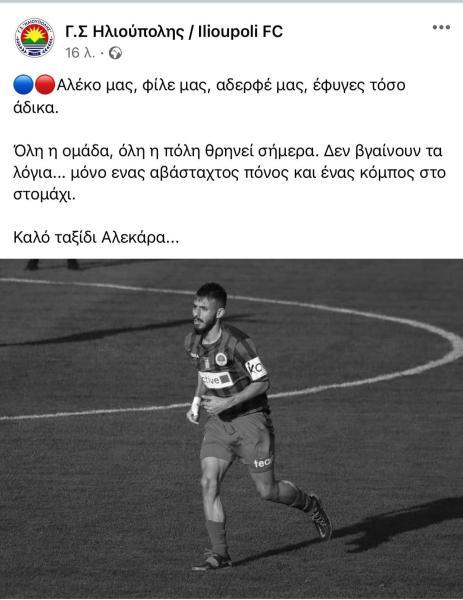 Translated from Greek, the club wrote: “Our Aleko, our friend, our brother, you left so unjustly.

“The whole team, the whole city is mourning today.

“The words do not come out… only an unbearable pain and a knot in the stomach. Have a good trip Alecara.”

The COVID World included this brief clip after the ambulance arrived to the scene:

The heartbreaking death of Alexandros Lampis continues the unprecedented rise in cardiac-related events and deaths among professional footballers.

Although health authorities refuse to investigate, there’s much speculation that the COVID-19 jabs have caused the dramatic increase in sudden cardiac arrests.