After purging the healthcare system of able-bodied staff, several states find themselves in a self-manufactured crisis.

Although omicron is a milder strain, short-staffed medical facilities will make proper care more challenging throughout the winter.

Some states, such as Maine and New York, called in the National Guard to fill the void in the healthcare system.

Massachusetts Gov. Charlie Baker announced Tuesday he will activate up to 500 members of the National Guard to support understaffed hospitals across the state facing a surge of COVID-19 patients and to bolster non-emergency medical transportation needs.

Up to 300 Guard members will begin training this week to provide nonclinical support at 55 acute care hospitals and 12 ambulance service providers, Marylou Sudders, state Secretary of Health and Human Services said at a news conference. They will be deployed Dec. 27.

Last Friday, Ohio Gov. Mike DeWine announced more than 1,000 members of the Ohio National Guard would be ordered into hospitals overwhelmed by patients being treated for COVID-19, the vast majority of whom are also unvaccinated.

While omicron is now responsible for an estimated 90% or more of new infections in the New York area, the state National Guard in early December deployed 120 Army medics and Air Force medical technicians to 12 nursing homes and long-term care facilities to relieve fatigued staff.

Hospitals around the country have fired unvaccinated healthcare employees that worked throughout the “pandemic” without an experimental injection.

After tossing unvaccinated workers like garbage, many states are in this predictable predicament.

Due to omicron concerns, the CDC issued interim guidelines for managing healthcare personnel who may get exposed to COVID-19.

But if you pay close attention to the updated guidelines, you’ll notice something interesting in their chart.

Healthcare personnel have no work restrictions when in a crisis, even when infected by SARS-CoV-2. And beneath vaccination status, it lists boosted, vaccinated, and unvaccinated.

According to the chart, healthcare personnel with mild symptoms can still work during a crisis.

If any vaccination status is okay, explain the need to fire thousands of unvaccinated healthcare workers.

I dont understand. If you want staff to keep infecting others rather than recovering themselves, just say that. WHY ISSUE GUIDELINES AT ALL?! pic.twitter.com/oQrrc0hyBM

Under new CDC guidance, infected health workers can return after 7 days with a negative test and no symptoms.

But CDC says timeline can be further sped up if there are staff shortages — and in a crisis situation, an infected worker could even face “no work restriction” at all. pic.twitter.com/oQp6LIp9bP 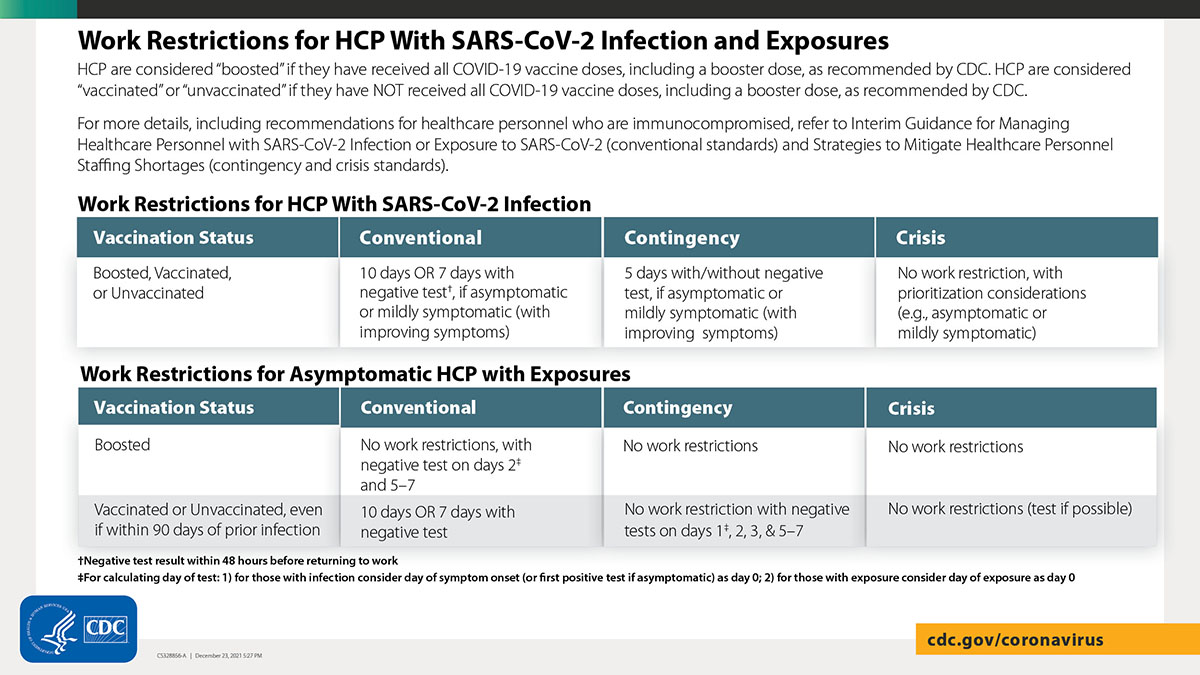 The CDC listed the following guidelines for returning to work with COVID-19 infection:

The following are criteria to determine when HCP with SARS-CoV-2 infection could return to work. After returning to work, HCP should self-monitor for symptoms and seek re-evaluation from occupational health if symptoms recur or worsen.

Either an antigen test or nucleic acid amplification test (NAAT) can be used . Some people may be beyond the period of expected infectiousness but remain NAAT positive for an extended period.  Antigen tests typically have a more rapid turnaround time but are often less sensitive than NAAT.  Antigen testing is preferred for symptomatic HCP and for asymptomatic HCP who have recovered from SARS-CoV-2 infection in the prior 90 days.

HCP with mild to moderate illness who are not  moderately to severely immunocompromised:

HCP who were asymptomatic throughout their infection and are not moderately to severely immunocompromised:

HCP with severe to critical illness and are not moderately to severely immunocompromised:

HCP who are moderately to severely immunocompromised may produce replication-competent virus beyond 20 days after symptom onset or, for those who were asymptomatic throughout their infection, the date of their first positive viral test.

The criteria for the test-based strategy are:

HCP who are symptomatic:

HCP who are not symptomatic: