Do you remember what Anthony Fraudci told Senator Rand Paul when he testified before Congress?

Paul didn’t hold back calling out Fraudci’s blatant lies to Congress about funding the Wuhan Institute of Virology (WIV) via a grant to EcoHealth Alliance.

He read Fauci the penalties of committing this felony in their exchange:

But could Fraudci’s days of dodging justice finally be over?

The letter states EcoHealth Alliance “was testing if spike proteins from naturally occurring bat coronaviruses circulating in China were capable of binding to the human ACE2 receptor in a mouse model.”

The NIH letter also determined that EcoHealth Alliance violated their terms of service from the NIH Grant.

EcoHealth Alliance is being notified to submit unpublished data to the NIH from the experiments conducted under their grant.

The NIH–specifically, Collins, Fauci, and Tabak–lied to Congress, lied to the press, and lied to the public. Knowingly. Willfully. Brazenly.

July 28th NIH says “no NIAID funding was approved for Gain of Function research at the WIV.”

Obviously, they were lied to.

NIH confirmed today EcoHealth and the WIV conducted GOF research on bat coronaviruses.
@PeterDaszak with EcoHealth hid it from the USG. pic.twitter.com/Ou3ZLKto0L

Read the NIH letter below: 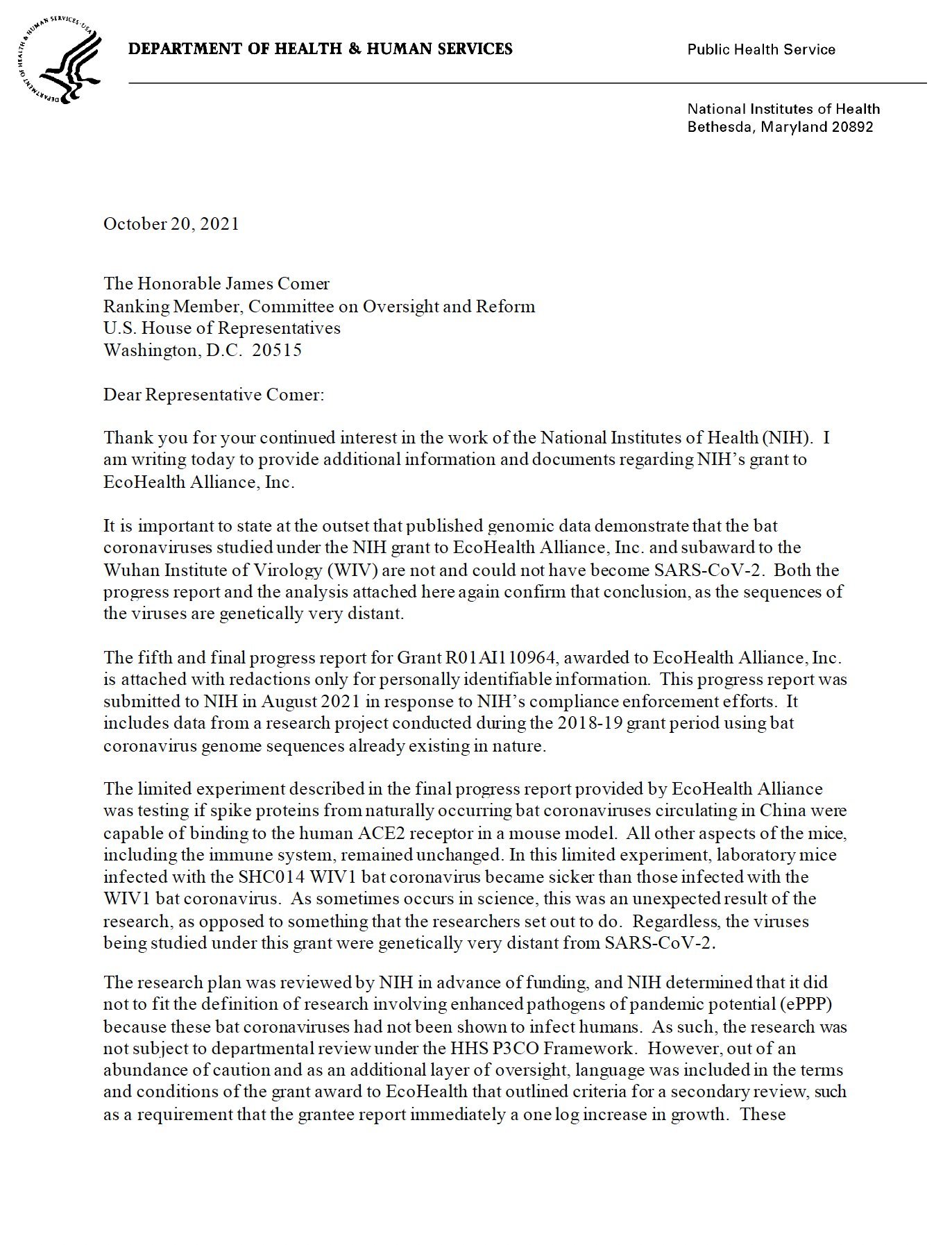 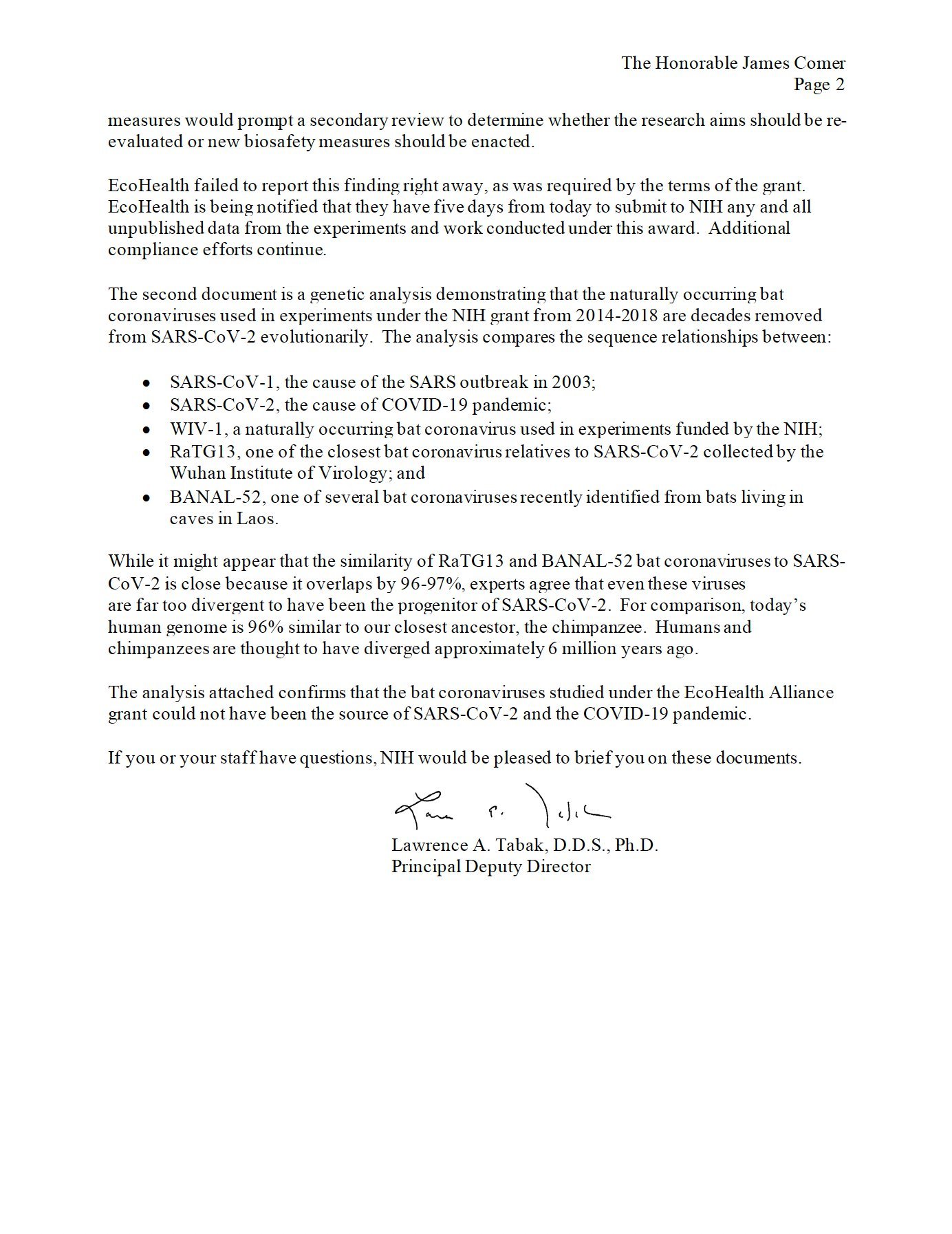 -Fauci lied to Congress about funding the dangerous research

Here’s a rundown of EcoHealth Alliance’s violations of the NIH grant’s Terms and Conditions:

"No funds are provided and no funds can be used to support gain-of-function research covered under the October 17, 2014 White House Announcement (NIH Guide Notice NOT-OD-15-011)."

"[S]hould any of the MERS-like or SARS-like chimeras generated under this grant show evidence of enhanced virus growth greater than 1 log over the parental backbone strain you must..provide..NIAID Program Officer and Grants Management Specialist..with..data"

"Effective February 9, 2017, if the recipient organization has submitted a renewal application on or before the date by which a..Final-RPPR..would be required for the current competitive segment, then submission of an 'Interim-RPPR' via eRA Commons is now required."

"….If your IBC or equivalent body or official has determined, for example, by conducting a risk assessment, that the work being planned or performed under this grant may be conducted at a..safety level that is lower than BSL3."

The NIH now admits it with these latest documents.

This is probably the dumbest comparison I’ve seen from a scientific org. https://t.co/Tp1fK2l2H1 pic.twitter.com/FqvAVkzzvk

Quite a shift from NIH. TLDR yeah Fauci lied and we funded gain of function, but we totally didn't fund the creation of COV2. https://t.co/epptwC4IsW

How can they be certain when EcoHealth Alliance violated the grant’s Terms and Conditions?

What else is the NIH or Daszak hiding from the public?

And when is Fauci getting locked up for lying to Congress?