President Trump got the last laugh regarding Liz Cheney.

The vote was taken behind closed doors but according to reports an overwhelming amount of Republicans voted to have Cheney ousted.

President Trump was stoked to find out the results of the vote and released a statement saying “Liz Cheney is a bitter, horrible human being. I watched her yesterday and realized how bad she is for the Republican Party”.

He then completely blasted her by saying “I look forward to soon watching her as a Paid Contributor on CNN or MSDNC!”.

Donald Trump mocks Liz Cheney as a 'horrible human being' https://t.co/GOn4gmJVNl via @MailOnline

Check out what The Hill had to report on Trump’s latest statement:

President Trump on Wednesday celebrated the removal of Rep. Liz Cheney (R-Wyo.) from her role in House GOP leadership.

Trump derided Cheney in personal terms in a statement following a vote to oust her as House Republican Conference chair over her repeated criticisms of the former president and his frequent, unproven claims about the 2020 election.

“Liz Cheney is a bitter, horrible human being. I watched her yesterday and realized how bad she is for the Republican Party,” Trump said in a statement, referencing a speech in which Cheney vowed she would not remain silent about Trump’s election lies.

Trump also dismissed Cheney as a “talking point for Democrats,” suggesting she was a distraction from issues like the border and economy.

“She is a warmonger whose family stupidly pushed us into the never-ending Middle East Disaster, draining our wealth and depleting our Great Military, the worst decision in our Country’s history,” Trump said. “I look forward to soon watching her as a Paid Contributor on CNN or MSDNC!”

What happened to Liz Cheney is what happens when you go against 74+ million supporters of Donald J. Trump.

After she was ousted Cheney had some choice words for President Trump:

Liz Cheney immediately after she was ousted from House leadership: "I will do everything I can to ensure that the former president never again gets anywhere near the Oval Office." pic.twitter.com/mxrPHqtRup

The Daily Mail covered the big story too:

President Donald Trump celebrated the removal of Liz Cheney as the third most powerful Republican in the House of Representatives on Wednesday morning, mocking her as a ‘bitter, horrible human being.’

The message was posted on his website minutes after Republicans held a secret ballot removing her as chair of the House Republican Conference.

Her opponents say her vociferous criticism of the 45th president is distracting from party attacks on Democrats and President Joe Biden’s agenda.

‘Liz Cheney is a bitter, horrible human being,” said Trump.

‘I watched her yesterday and realized how bad she is for the Republican Party. She has no personality or anything good having to do with politics or our country.

‘She is a talking point for Democrats, whether that means the Border, the gas lines, inflation, or destroying our economy.’

He accused her family of being a warmonger and made a prediction that she would continue sniping from the sidelines.

‘I look forward to soon watching her as a paid contributor on CNN or MSDNC,” he added.

Minutes earlier she was removed from her leadership position, as widely anticipated

Here’s Trump’s full statement down below: 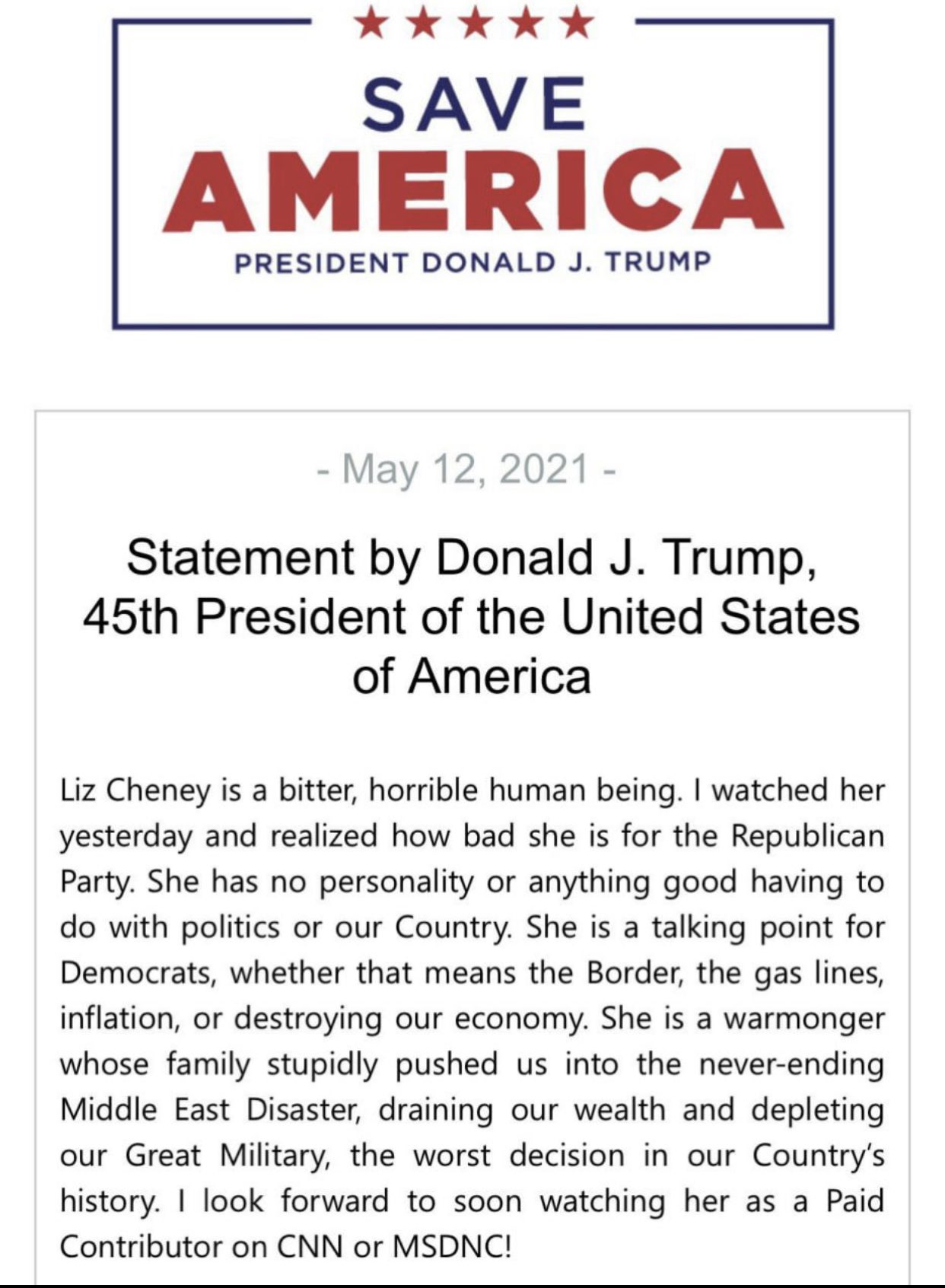