Recently in headlines, the left has tried to champion Ruth Bader Ginsburg as a trailblazer.

What is a trailblazer?

By definition, a trailblazer is a person who is the first to do something.

Ruth Bader Ginsburg was not the first woman on the Supreme Court by any means.

But you know who was?

President Ronald  Reagan on July 7, 1981,  nominated O’Connor as an Associate Justice of the Supreme Court to replace the retiring Potter Stewart. After the nomination, she also received a unanimous Senate approval making her the first woman ever to be appointed to the U.S. Supreme Court. Sandra Day O’Connor is a trailblazer but being she was a Republican nominated by Reagan she doesn’t get much credit. The left rather champion, Ruth Bader Ginsburg, a Democrat who was nominated by Bill Clinton as a trailblazer.

#OTD in 1981, President Reagan’s nominee, Sandra Day O’Connor was officially confirmed, 99-0, as the first woman in history to serve on the Supreme Court! Sandra was an incredible legal mind and an huge inspiration to young girls and women around our country. pic.twitter.com/Ad2KcQOPMt 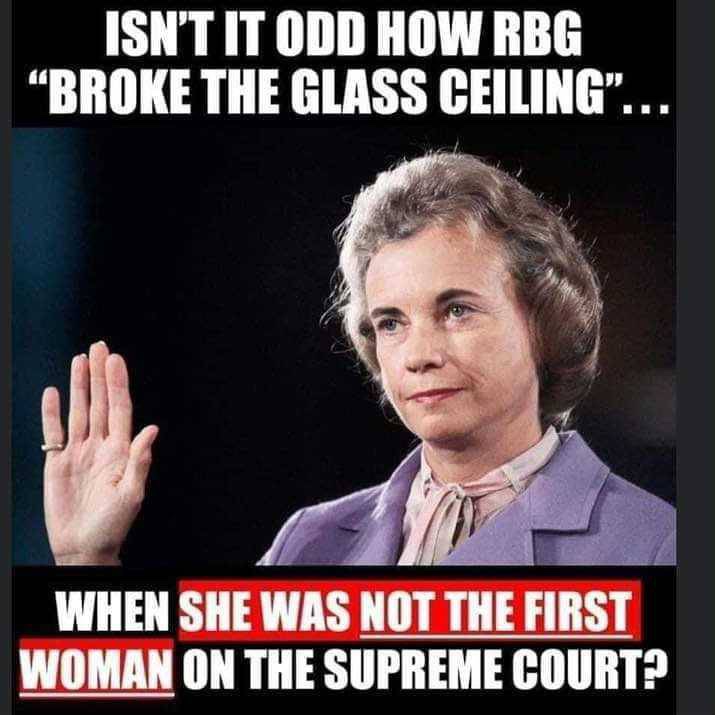 Things even get more interesting!

O’Connor was confirmed just 33 days after she was nominated.

Justice Sandra Day O’Connor was appointed to the Supreme Court by President Ronald Reagan, and served from 1981 until 2006. Beginning with her childhood growing up on her family’s ranch, the exhibition recalls her life before joining the Supreme Court, her service and accomplishments on the Court, and her continuing legacy off the Court.

The Dems might of thought trailblazing is made through fashion statements.

And she would also wear differing collars to express her judgements + thoughts pic.twitter.com/j4MwtbcoHZ

The left will continue to try to rewrite history every chance they get.

Let's have a chat about the notorious RBG and being a trailblazer and all that rot. Sandra Day O'Connor served on SCOTUS for 12 years before RBG was seated. RBG was not the first woman on the court and the writing O'Connor out of history is maddening.

Thee vote was 99-0. Only Sen. Max Baucus, D-Mont. who was attending an economic conference in his home state, was missing from the tally. He had supported O’Connor in earlier committee action.

After the vote, O’Connor appeared on the steps of the Capitol with Senate leaders, Vice President George Bush and Attorney General William French Smith.

Grinning jubilantly, she said she was overjoyed by the depth of Senate support for her nomination.

“My hope is that after I’ve been across the street and worked for awhile that they’ll all feel glad for the wonderful vote they gave me today,” she said.

Once installed on the court, she said, “I’m going to get very busy, very fast.”

If you would like to learn more about Sandra Day O’Connor here is a great video: