Ok folks, this was reported earlier today by Rush Limbaugh.

And it’s a doozy!

Take a look, from Rush:

The Obama administration originally lied about Brennan’s visit, but they were forced later to admit the report was true after evidence of Brennan’s visit emerged. This is that guy, John Brennan, who over the weekend encouraged every deep stater to come forward and blow the whistle on Trump. (summarized) “There is no limit on the number of individuals who can use the whistleblower statute. If you think you were involved in unlawful activity as a result of Trump, now is the time to report it!”

Is Brennan gonna pay all of you whistleblowers? Is he gonna pay for your protection? This is a former director of the CIA asking the deep state to rise en mass and start blowing the whistle on Trump with a bunch of made-up lies! This guy’s fingers are as dirty as anybody’s on the dossier, including McCain’s people. He traveled to Ukraine under a fake passport. The Obama regime denied it until the news was undeniable. Then they had to admit it.

And here's more from Rush:

The first thing that happened was John Brennan. Now, John Brennan’s hands are as dirty as Obama’s in this whole thing. John Brennan (you probably have forgotten) traveled to Ukraine back in the time period around 2016 under a fake passport so it wouldn’t be known that he had gone, and he was arranging data on the dossier and all of the other dirt that they were trying to amass. Ukraine — not Russia, Ukraine — is the center of the universe of all this. Now, over the weekend John Brennan, Obama’s director of CIA — a man who voted for the Communist Party candidate in 1976! 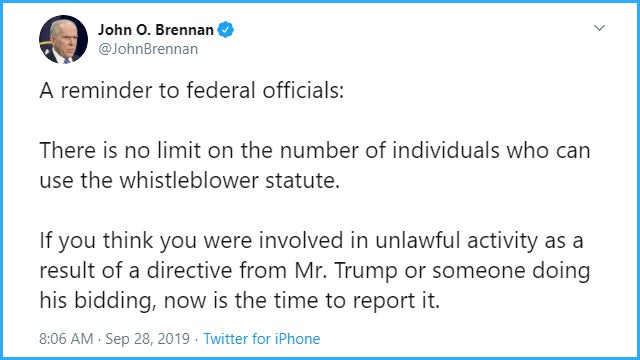 John Brennan is among the radical leftists who personally, viscerally despise Donald Trump. He signaled everybody in the deep state to attack the president. Here’s the tweet: “A reminder to federal officials: There is no limit on the number of individuals who can use the whistleblower statute. If you think you were involved in unlawful activity as a result of a directive from Mr. Trump or someone doing his bidding, now is the time to report it.” Brennan just sent out a call to everybody in the administrative state to come forward and be your own whistleblower.

He’s giving them cover. He’s telling them, “Come forward! We’ll protect you. You can make it up. ‘If you think you were involved in unlawful activity as a result of a directive… now is the time to report it.” No limit on the number of people who can be whistleblowers! By the way, the theme of the audio sound bites today is me being on the cutting edge of everything. Things I predicted, things I said, are being echoed all over the place. Like I said last Friday, “The real whistleblower in this country is Donald Trump.

“He’s the real whistleblower. He’s blowing the whistle on the decades of corruption inside the Washington Beltway, throughout the administrative state.” I was thrilled to see Stephen Miller, who is Trump’s point man on immigration in the administration, actually call it the same thing. He said, “Trump is the whistleblower,” because Trump is blowing the lid on all these people and threatens to blow it even more, and that’s why he’s gotta be stopped. I predicted Hillary Clinton’s getting ready to get back in, seek the presidency. There’s a bunch of reasons for it.