President Trump is not going to tolerate rogue judges from the 9th Circuit anymore and he just sent a message!

President Donald Trump slammed the California-based Ninth Circuit Court of Appeals on Wednesday, hours after venting at Chief Justice of the United States John Roberts over what he sees as a liberal court there packed with partisan judges.

Complaining about 'criminals in the caravan,' the president used flawed federal court statistics in complaining about criminals embedded in a caravan of would-be migrant asylum seekers looming at the U.S. Mexico border.

U.S. District Judge Jon Tigar in San Francisco sided on Monday with immigrant-rights groups who said Ameircan immigration law permits asylum claims no matter where people enter the U.S. or whether they do so legally.

The move infuriated the president, who called the famously liberal-leaning circuit a 'disgrace' a day later as he left the White House, and scoffed: 'This was an Obama judge.'

On Wednesday amid his tiff with Roberts – who insisted '[w]e do not have Obama judges or Trump judges, Bush judges or Clinton judges' –  he tweeted a claim that the Supreme Court has overturned '79% of these [Ninth Circuit] decisions,' attributing it to an unnamed Fox News Channel broadcaster.

President Donald Trump complained bitterly on Tuesday about a court decision from a Ninth Circuit District judge that hamstrung his ability to limit asylum claims from migrants, and he suggested on Wednesday that 79% of the Ninth Circuit's decisions are overturned in the Supreme Court 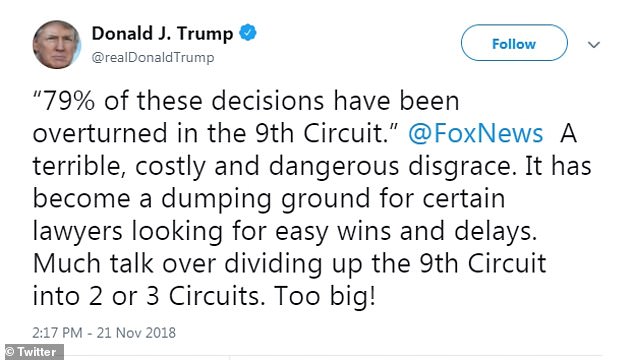 Trump hinted that the Ninth Circuit appeals court should be broken in order to dilute the power of Obama-appointed liberal judges; but he confused the lower-court judge who ruled against him with an appeals court that has irked him in the past. He also got the statistics wrong

The president claimed that the Ninth Circuit – which includes federal courts in Alaska, Arizona, California, Guam, Hawaii, Idaho, Montana, Nevada, the Northern Mariana Islands, Oregon and Washington – has become a dumping ground for certain lawyers looking for easy wins and delays. Much talk over dividing up the 9th Circuit into 2 or 3 Circuits. Too big!'

Trump has long asserted that the Supreme court overturns Ninth Circuit decisions more often than those from any other appeals court. But in the past five years that hasn't been true.

U.S. District Judge Jon Tigar in San Francisco sided Monday with immigrant-rights groups who said Congress was explicit when it wrote asylum laws to encompass even illegal aliens; Trump lumped him in with the appeals judges on a higher court

He wrote also on Wednesday that '[t]here are a lot of CRIMINALS in the Caravan. We will stop them. Catch and Detain! Judicial Activism, by people who know nothing about security and the safety of our citizens, is putting our country in great danger. Not good!'

The Department of Homeland Security said this week that more than 500 criminals were part of the Central American migrant caravan that arrived at the San Ysidro border crossing on Monday.

Officials would not reveal how they identified the criminals, but said most of the individuals were adult men and teenage boys.

And more from the Washington Examiner:

President Trump said Thursday that Congress may have to step in to stop people from filing lawsuits in the 9th U.S. Circuit Court of Appeals, which he said seems to routinely rule against his policies.

Trump has been battling the 9th Circuit in the nearly two years he's been in office. This week, a California judge blocked Trump's effort to deny migrants the ability to seek asylum if they enter the U.S. outside a formal point of entry.

Trump said people who oppose his border plans have relied on 9th Circuit rulings to thwart him, and said Congress might be asked to step in to make the file legal arguments elsewhere.

Trump said despite the efforts of his adversaries, he's been able to toughen up the border.

"The border's coming along very well, it's become very strong," he said. "We're getting some terrible decisions from the 9th Circuit, as usual."

Only while supplies last....