“Liberal” paradise that is.

Once the hot item for the Left, the Warren love seems to have worn off a bit….to the tune of a 30% drop in Q4.

Perhaps all the businesses and business people who you constantly demonize don’t want to send you their hard earned money?

Sen. Elizabeth Warren’s campaign told supporters in an email on Friday that, so far, it has raised just over $17 million in the fourth quarter, a significant drop from her fundraising haul during the third quarter.

The memo asks backers to step up giving to the campaign.

“So far this quarter, we’ve raised a little over $17 million. That’s a good chunk behind where we were at this time last quarter,” it says.

Warren finished the third quarter bringing in $24.6 million, which was much more than most of the other Democratic primary contenders, including former Vice President Joe Biden and South Bend Mayor Pete Buttigieg. Sen. Bernie Sanders – who, like Warren, shuns big-money fundraisers – led the field with more than $25 million during the third quarter.

If the $17 million total stands that would represent a 30% drop from the previous quarter. The current quarter ends in four days.

The development comes after Warren’s momentum in the Democratic primary race slowed down in recent months. At one point she was virtually neck and neck with Biden at the top of national polling averages. Biden’s campaign has said it expects to finish raising more in the fourth quarter compared with the previous period.

A spokesperson for Warren did not return a request for comment. 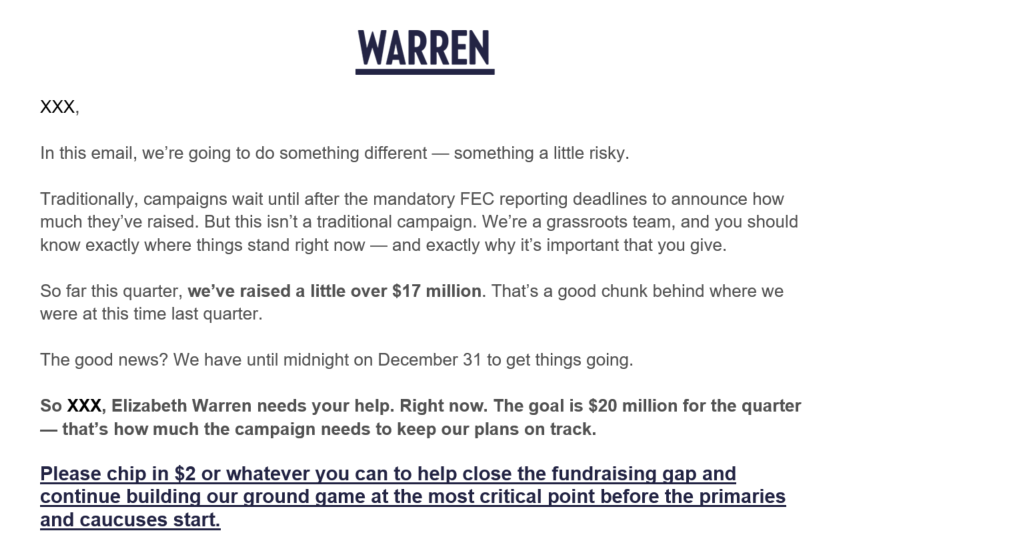 The dip in fundraising also comes after she escalated her attacks on billionaires and wealthy donors. She has accused rival Mike Bloomberg of trying to buy the Democratic nomination, while she has gotten into public spats with Wall Street titans such as Leon Cooperman and Lloyd Blankfein.